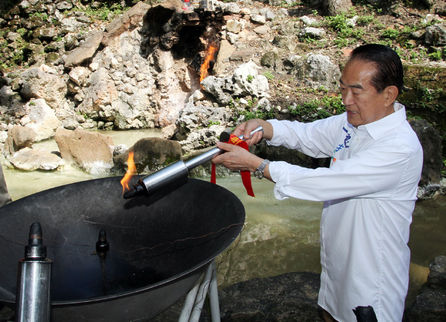 Soong: KMT and DPP should work together

The PFP contender was at Tainan’s Guanziling over the weekend, where he visited the area’s famous Fire and Water Cave, a geological structure known for its unique natural landscape.

"Like fire within the water, and water within the fire, both parties should seek ways to work in mutual harmony," he said.

Accompanied by former Tainan county commissioner Lee Ya-chiao of the KMT, Soong also compared metaphorically the relationship between the Taipei City government and the City Council with fire and water, in which both local entities have remained in co-existence for the development of Taiwan’s capital.

Taipei Mayor Ko Wen-je is expected to be invited to join the PFP at the City Council Monday morning to exchange views and opinions regarding the future developments of Taiwan’s capital city.

“The KMT and DPP should learn to co-exist like fire and water, and leave their political differences behind for the better of Taiwan,” Soong exclaimed.

When asked about his views regarding Tainan Mayor William Lai’s recent rhetoric surrounding Taiwan’s declared independence, the PFP chairman said cross-strait peace and stability are what the public seeks, and that the nation’s political parties should not side-step the peaceful wish of the people by waging an all-out war against the Chinese.