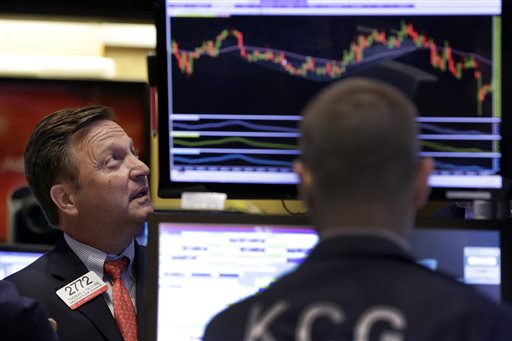 Root of investor anxiety: Uncertainty about China and Fed

Fears about China's slowdown and a coming U.S. interest rate hike have sent global stock markets into a fidgety freefall.

But why? China's economy has been slowing for years. And the Federal Reserve has long been expected to raise short-term interest rates from near zero, where it's kept them since 2008. So what's sowing panic now?

In a word: Uncertainty.

Investors have grown used to near-zero rates and a booming Chinese economy — the world's second-largest after the United States. No one knows how the global economy will manage without them.

Many investors aren't waiting to find out. They've been dumping stocks with a vengeance. When investors feel unsure about the future, many tend to panic.

The iShares MSCI Emerging Markets index has lost nearly 16 percent of its value since mid-July. In the United States, the Dow Jones industrial average and the Standard & Poor's 500 index have both sunk about 10 percent since July 20, even though both rose sharply on Wednesday.

The July-to-September quarter was the S&P's worst since 2011.

"Concerns about China's economy are heightening the level of angst among global investors who are already having to cope with multiple sources of uncertainty," says Eswar Prasad, professor of global trade policy at Cornell University.

As it undergoes a painful shift away from an overreliance on exports and overinvestment in homes and factories, China's economy has decelerated for four straight years. And it's almost surely slowing again in 2015.

The International Monetary Fund forecasts that China's economy will expand 6.8 percent this year. It would be its weakest growth since 1990. Many economists, skeptical of China's official numbers, suggest that growth might even dip below 6 percent.

Beijing's clumsy attempts to halt a drop in its own stock market and its confusing Aug. 11 decision to devalue its currency, the yuan, have escalated fears. The concern is that Chinese policymakers have panicked and that the economy might be in worse shape than previously thought.

"If China's scared, suddenly the rest of the world is scared as well," says Eric Lascelles, chief economist for RBC Global Asset Management. "China is the subject of the day. What is happening there, and how consequential is it for the rest of us? There are a lot of unknowns."

Any economic news out of China is being scrutinized by anxious investors. Global stocks tumbled Monday after China reported that profits at industrial companies had plunged 8.8 percent in August from a year earlier. Investors are nervously awaiting a report Thursday on Chinese manufacturers.

"Normally, when the Fed pushes rate hikes off, it's catnip to the market," Lascelles says.

Instead, the S&P 500 has dropped 3 percent since the Fed's decision. Fears about China's economy are a key factor.

That economy is slowing partly because Beijing is engineering a delicate transition away from growth built on exports and often-wasteful investment and toward slower, more sustainable growth fueled by spending by China's growing middle class. No one knows whether it will succeed.

"China is the great imponderable," says Ajay Rajadhyaksha, head of macro research at Barclays. "The (Chinese) economy's not going to suddenly collapse tomorrow. But it will keep slowing down for a long time, and more than many people expect."

China's economy last year accounted for nearly a third of global growth. The IMF says its slowdown is exerting a bigger-than-expected effect beyond its borders, particularly in emerging market countries — from Chile to Indonesia to Nigeria — that depend on China's industrial machine to buy their raw materials.

The IMF warned this month that China's slowdown and falling raw-materials prices raised risks to global economic growth this year.

Concerned about the global outlook, IMF Managing Director Christine Lagarde in June urged the Fed to delay a rate hike until next year. In an interview Wednesday with CNBC, Lagarde didn't repeat her call for a delay until 2016. But she did say the Fed shouldn't raise rates until economic conditions justified it.

"The big concern among investors is the Fed would be increasing interest rates into this slowing global economy," says Russ Koesterich, global chief investment strategist at BlackRock.

Higher U.S. rates could destabilize emerging markets as investors pull money out of those markets and move it into the United States to seek higher yields on U.S. Treasurys.

"The combination of a Fed rate hike and a further slowdown in China's growth could heighten vulnerabilities among a large group of emerging market economies" — including Brazil, Turkey, South Africa, and Russia — says Cornell's Prasad.

Higher U.S. rates would likely help drive up the dollar's value, too. That would squeeze emerging market companies that borrowed heavily in recent years in U.S. dollars. They would have to shell out more in their local currencies to meet dollar loan payments.

"There are good reasons to be nervous," Rajadhyaksha says.