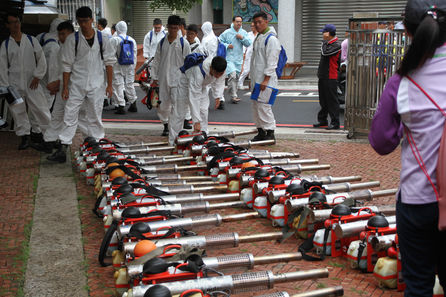 “Authorities in both Kaohsiung and Tainan are working around the clock to prevent the dengue fever epidemic from worsening than it already is,” he said.

According to Su Ih-jen of the National Health Research Institutes, the number of nationwide dengue fever contracts since the beginning of summer is expected to rise to over 50,000 from the originally anticipated 35,000 as a result of Typhoon Dujuan.

“The next two weeks will be critical in determining if the epidemic has worsened,” Su observed.

As of Tuesday, 15,793 cases had been reported in Tainan and 2,266 in neighboring Kaohsiung, according to CDC figures.

The mosquito-borne disease has infected 18,365 people nationwide, with 56 reported deaths since May, the CDC said.

Authorities are working very hard to dispel the disease, even during the Mid-Autumn Festival health officials have been deprived of their days off, Chuang said.

“There is certainly a risk of escalation with the passing of every typhoon,” he explained, urging the public to show confidence in the government’s efforts to combat dengue fever.

As the dominant strain of dengue fever this year is the DEN-II virus, the CDC said the symptoms are different from in previous years, with patients exhibiting a longer lasting fever. Authorities added that rashes and bone pain are not as common as in previous years, but that patients are more likely to be anxious or exhibit signs of depression.