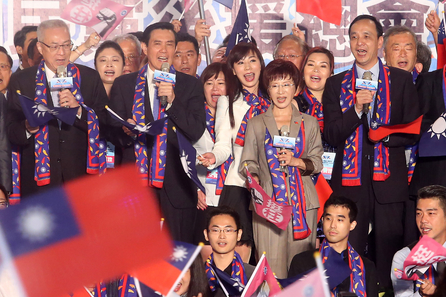 Ma taunts Tsai over her stance on ‘status quo’

“By maintaining the status quo, Tsai should acknowledge that she accepts the ‘1992 Consensus’ under the ‘one China’ framework,” Ma said, stressing that it is a unilateral policy supported by Taiwan, China and the United States.

He said the status quo Tsai wishes to maintain is the same status quo that she previously denounced as "pandering to China and selling out Taiwan."

Ma was at the Grand Hotel in Taipei Wednesday morning when he made the remark, where he presided over a supporters’ gathering with Taiwanese investors in China, an event which saw nearly 800 participants.

During the reception, the president also voiced his strong support for Kuomintang’s presidential candidate Hung Hsiu-chu, urging Taiwanese expats to show their support in next January’s election.

Ma touted the efforts he made to promote cross-strait reconciliation based on the so-called “1992 consensus,” an endeavor which helped expand Taiwan’s international presence for the last seven years.

“This status quo took us seven years to establish. If she finds it so intolerable, why does she want to maintain it?” Ma said, adding that the consensus is not only about keeping peace and stability across the strait, but also internationally.

Meanwhile, he also stressed that the government also emphasizes on maintaining the cross-strait status quo of "no unification, no independence, and no use of force" under the Republic of China Constitution framework.

According to past public opinion surveys conducted by the Mainland Affairs Council (MAC), over 53 percent of Taiwanese believe the "one country” connotation be the R.O.C., Ma said.

“As president, one has to abide by its Constitutions,” he exclaimed, adding that the 1992 Consensus is based under that framework, and Tsai would have to abide by the law if she wants to become president of the R.O.C.