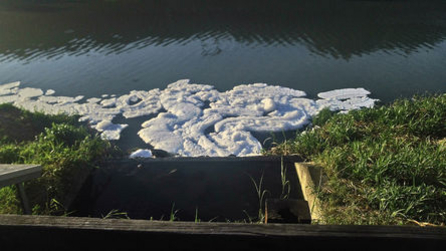 TAIPEI (Taiwan News) – Four guilty verdicts and a fine were overturned by a court Tuesday in the case of pollution of a river in Kaohsiung by Advanced Semiconductor Engineering Inc.
The world’s largest chips testing and packaging group was accused of having released untreated wastewater from its K7 plant into the Houjing creek, thus possibly polluting the water as well as nearby rice fields. Following the accusations, the factory was shut down for a while beginning in late 2013.
ASE was accused of having falsified documents and neglected repeated warnings and fines, even going to the trouble of diluting samples in order to mislead inspectors, prosecutors said.
Four company officials had been found guilty and ASE had been fined NT$3 million (US$90,000) by the Kaohsiung District Court, but on Tuesday, the Taiwan High Court in Kaohsiung threw out those convictions, finding all four men not guilty and cancelling the fine for the company.
The four had initially received prison sentences ranging from 16 to 22 months, though all had been suspended for periods from four to five years.
The High Court said the way the water had been allowed to flow into the creek was not covered by existing legislation, but needed new legislation.
The Kaohsiung District Prosecutors Office said it would study Tuesday’s verdict before making a decision whether or not to file an appeal.
ASE said it thanked the court for defending the innocence of the suspects, and said it would do even more to protect Taiwan.