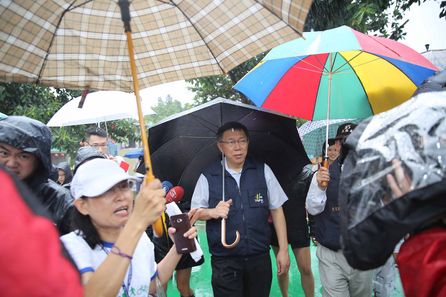 TAIPEI (Taiwan News) – Taipei City Mayor Ko Wen-je on Tuesday hinted at an apology for declaring the day off even though Typhoon Dujuan had already gone, while accusations flew over who was responsible for decision-making flip-flops.
Monday was a holiday for most of the country as the typhoon barreled across the island, killing two people and causing widespread destruction.
However, by evening it became clear, according to weather forecasters, that the eye of the typhoon was expected to move out over the Taiwan Straits during the night, making it likely that Tuesday would be a quieter day.
Around 8 p.m. Monday, several local governments in the north, including Taipei City, New Taipei City and Keelung City, announced that schools and offices would remain closed until Tuesday noon.
Barely two hours later, the same governments extended the closures to last the full day.
When Tuesday morning came around however, it was clear that there had been no need for a holiday, since, at least in Taipei, there was hardly any wind or rain.
Ko said that for declaring a day off during such weather, he should not be able to face the country or the people. As a reason for the change from half a day to a full day off, he mentioned the fact that trains and high-speed trains only resumed service at noon Tuesday, leaving many people unable to arrive at work on time.
While declaring only half a day off had been done before, each incidence had occurred during the afternoon as a typhoon grew worse, Ko said. There had never been an example where people had only the morning off and needed to return the work after noon, according to the mayor.
He did not confirm media reports that New Taipei City Mayor Eric Liluan Chu was the one who had insisted on half a day typhoon holiday in a phone call.
Keelung City Mayor Lin Yu-chang complained about not having been informed by New Taipei City about the decision to give half a day off, but officials in the latter government said that for several years the cities had cooperated. Deputy mayors and local government officials were in constant contact and had exchanged views before reaching a decision, so Lin could only complain about his own city officials not having informed him, New Taipei City said.
The Keelung mayor said that Taipei and New Taipei had been leading the decision-making process in this case, and wondered whether his city would go it alone next time.
Only the southern cities of Tainan and Kaohsiung and the county of Pingtung had declared Tuesday a normal working day.