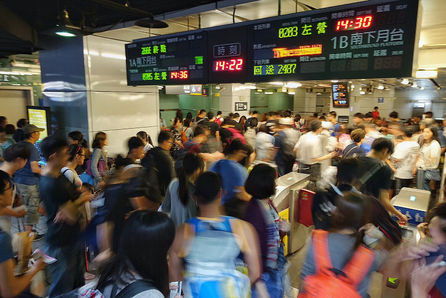 Taiwan’s railway network has taken a huge blow as Typhoon Dujuan made its way through the island, creating havoc and disruptions on the system’s operating schedule, according to the Taiwan Railways Administration (TRA) on Tuesday.

According to the railway administration, the Puyuma Express has resumed its Taitung-Hualien services at 9:40 a.m. Tuesday. However, for other north-bound services from Taiwan’s eastern line, including the Tzu-Chiang Limited Express, Chu-Kuang Express, Fu-Hsing Semi Express, Local and Ordinary Express, operations via the Ilan Station will only resume after 12 p.m.

Other than the trains traveling south from the Tainan Station, all south-bound TRA services from the western line will only resume after 12 p.m., the TRA said.

Meanwhile, the THSRC said it would resume services starting at noon Tuesday.

On Monday, Taiwan’s high speed rail shut down its services after 3 p.m. as Dujuan crept its way toward the island. Thousands of passengers were stranded at THSR stations as they tried to grab the last ticket home.

For its Tuesday service at noon, the high speed rail company said it will increase non-reserved seats for trains leaving Taipei and Zuoying stations.