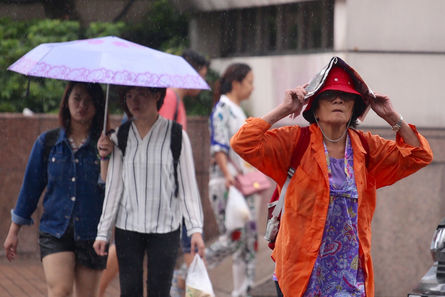 The government expects an estimated 3,919 residents to leave the Wulai area by the end of the day to seek shelter with families and friends, according to the Central Disaster Prevention and Response Council.

The mayor was at the disaster prevention center for a debriefing on the ongoing evacuation efforts in Wulai, as well as contingency plans should a disaster occur.

The government has also set up a temporary shelter at the Fu-Shan Community Center for residents of Wulai should they have no place to go, reports said.

In early August, Wulai was seriously impacted during Typhoon Soudelor, as people living in the area were cut off from the rest of the country due to landslides that have blocked its only road access.

At the time, roughly 2,000 residents were evacuated before Soudelor made landfall, but over 1,000 of them stayed behind as they were unwilling to leave their homes.

Chu also warned residents in the greater Taipei area to remain at home as Dujuan is forecasted to dump around 500 millimeters of rain on Taiwan.

More than 24,000 troops are on standby for disaster relief and evacuations, with 100 shelters set up. Emergency response centers have also been established in the north and east, the government said.