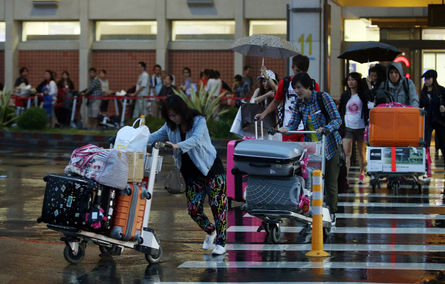 The eye of Typhoon Dujuan is expected to make landfall between 9 p.m. to midnight on Monday, the Central Weather Bureau (CWB) said, cautioning the public in northern and eastern Taiwan to be prepared for heavy rain. As of 8 a.m., the intensifying Dujuan was centered 260 kilometers east-southeast of Hualien, moving at a speed of 21 kilometers per hour in a west-northwesterly direction. It is packing maximum sustained winds of 184 km/h, with gusts reaching 220 km/h, according to the CWB. The storm is expected to be closest to Taiwan Monday afternoon until Tuesday morning. Residents in Taipei (including Taoyuan and Hsinchu) and eastern Taiwan's Hualien and Ilan are warned to brace for strong winds, with predicted 900mm of rainfall, the bureau said. Meanwhile, the governments of Taipei, New Taipei and Keelung urged local residents to take measures to prevent flooding and to store water for future use. The turbidity of the water may rise to untreatable levels due to flooding as Dujuan has picked up strength and is forecast to bring heavy downpours to the cities and counties north of Miaoli. Taiwan Railway Suspension The Taiwan Railways Administration (TRA) encouraged north-bound passengers to take an earlier train as services scheduled after 4 p.m. are cancelled. For south-bound passengers, the last TRA service from Taipei will be the No. 139 Tze-Chiang train at 5 p.m. Moreover, the Taiwan High Speed Rail Corporation (THSRC) will also be shutting down its services due to the tropical storm. Passengers taking the high-speed rail are advised to complete their scheduled travels before 3 p.m. Both the THSRC and the TRA have employed emergency response measures to handle the expected surge of passengers returning to work on the last day of the long Mid-Autumn Festival weekend. Flight Cancels As of Monday, the island’s commercial air service is starting to be affected by the typhoon. According to the Taiwan Taoyuan International Airport’s (TTIA), there are 23 canceled flights from the airport, including Xiamen Airlines (MF), which has canceled all flights to and from Taiwan on Monday. The involved flights are MF881, MF882, MF883, MF884, MF887, MF888, MF879 and MF880, between Fuzhou, Xiamen and Taiwan. For domestic flights, Uni Air, Mandarin Airlines, TransAsia Airways, and Far Eastern Air Transport have all cancelled their flights bound for Taiwan’s offshore islands after 12 p.m. Monday, according to the Taipei Songshan Airport website. As always, travelers are advised to check with airlines for up-to-the minute information on delays or cancellations.