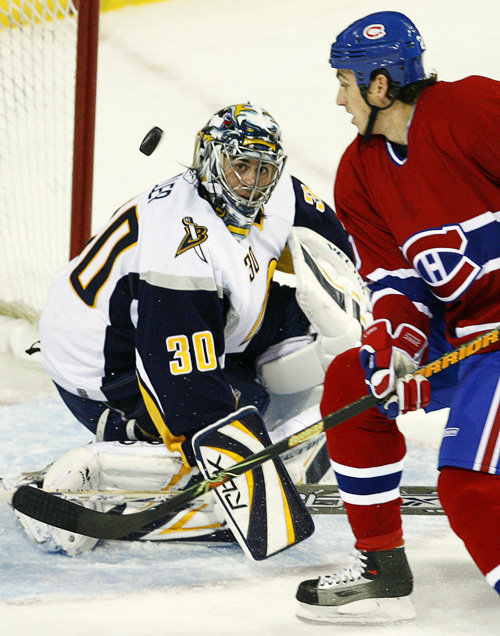 Chris Drury scored his 10th goal and the Buffalo Sabres set a new team record by extending their season-opening winning streak to nine games with a 4-1 win over the Montreal Canadiens on Monday night.
Buffalo moved to within one victory of tying Toronto's league record of 10 straight wins at the start of the 1993-94 season. The Sabres matched their previous record of eight, set in 1975-76, with a 6-2 win in Boston on Saturday.
Ryan Miller made 26 saves, losing a bid for his first shutout of the season on Mike Johnson's goal 9:06 into the third. Jiri Novotny, Thomas Vanek and Jason Pominville also scored for Buffalo.
Drury, who had two points to tie Maxim Afinogenov for the team lead with 14, assisted on Novotny's goal midway through the first before scoring his seventh goal in five games midway through the second, an unassisted short-handed effort that put Buffalo up 2-0.
Pominville scored for the third straight game moments later, deflecting Daniel Briere's shot past Cristobal Huet to increase the Sabres' lead to three. Vanek extended his goals streak to four games when he scored into an empty net after stepping out of the penalty box with 19 seconds left in the third.
Montreal, which blew a two-goal lead in Buffalo on October 6 before losing 5-4 in a shootout, lost in regulation for just the second time in eight games (4-2-2).
Huet stopped 22 shots for the Canadiens and his record fell to 1-1-2.
Dallas off to big start
In Dallas, Mike Modano scored the winning goal, Marty Turco had 33 saves and Dallas defeated Vancouver 2-1 for the best start in franchise history.
Modano, who had a goal nullified earlier, scored at 8:33 of the third when Dallas had a 5-on-3 advantage. He scooped up a rebound off a shot from Eric Lindros and beat Roberto Luongo. Niklas Hagman scored the Stars' first goal 2:24 into the first.
Dallas (8-1-0) topped the mark it set in 1971 when the franchise was in Minneapolis. It was 7-1-1 that season.
Luongo had 24 saves for Vancouver.
In other NHL action: Colorado 6, Los Angeles 1; San Jose 3, Columbus 0; Atlanta 6, Florida 3; Edmonton 5, Phoenix 2.