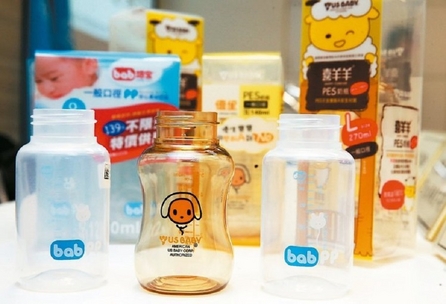 FDA in Taiwan found banned products, Bisphenol A (BPA) in the production of baby products on September 23. The products are PES, PP, and Pleasant Goat PES baby bottles by USBABY, and the PP baby bottle by BAB. EU has banned BPA in all baby products in 2011 while FDA in Taiwan also set regulations to prevent domestic manufacturers from producing or importing pacifiers and baby bottles that contains BPA. BPA, an endocrine disruptor that behaves in a similar way to estrogen and other hormones in the human body, is used in the manufacture of food contact materials such as re-usable plastic tableware and can coatings. You can also found BPA in cash register receipts! However, residues of BPA can migrate into food and beverages and be ingested by the consumer. In Taiwan, it is commonly for food stalls and restaurants to use plastic bags and containers as food wares. The residues of BPA can also be absorbed through the skin and by inhalation when come in contact with thermal paper, cosmetics and dust. BPA can undermine the reproduction and development of aquatic life, according to a report by the Royal Society, UK. They found that BPA has been shown to undermine the reproduction of all animal groups studied. It was also found to induce genetic abnormalities in amphibians and crustaceans. The health effects of BPA include reproductive disorders, heart diseases, diabetes, damages to brain functions and development, and cancer. Taiwan’s Act of Governing Food Safety and Sanitation could fine up to NT$3 million (US$90,226) if the products fail examinations. However, despite the regulations, many companies violate the law continuously. In August, the administration and local health bureaus carried out inspections on plastic baby bottles and pacifiers sold at 120 retail stores which include supermarkets, pharmacies etc. They tested a total of 129 plastic bottles and found BPA in 4 of them. FDA has requested the companies to recall and improve their products before Oct. 6 for more than 3,200 products are already sold. EU Food Safety Regulations on BPA BPA has always been the centre of discussion in food safety laws around the world. EU’s food safety agency gave green light to Bisphenol A from the beginning of 2015. The European Food Safety Authority (EFSA) re-evaluated BPA exposure and toxicity and stated that the current exposure level of BPA poses no health risk to consumers of any age. EU has banned BPA in baby bottles since March 1, 2011 but the plastic industry continues to raise pressure over BPA ban. Children are more vulnerable to BPA However, the adverse effects of BPA are proven in many studies. Stanford Prevention Research Center recently found that school meals in the United States can contain unsafe level of BPA, which put low income students particularly at risk. “Children, whose organ systems are still developing, are especially susceptible to hormone disruption from BPA. Sometimes only small changes in hormone activity during development can cause permanent adverse affects," according to researchers at Stanford University. Although some food manufacturers use “BPA-free” containers, the researchers warned that it might not be a safe alternative because the chemical used to replace BPA could be just as toxic. The researchers recommended fresh food in order to limit children’s exposure to BPA. Unfortunately, low income children are highly exposed to the risk of BPA because they are more likely to eat federally fund meals instead of fresh food. Therefore, more adequate regulations are required to safeguard all children’s health, regardless of nations.