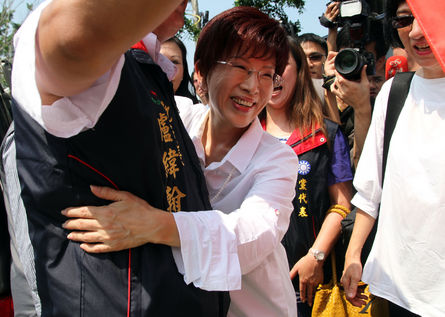 This was Hung’s second trip to the city as she is expected to give a speech on vocational training at the Dayeh University, where she will also interact with its students to exchange ideas and opinions on topics such as career developments.

Later in the evening, the presidential contender will hold an event to garner support from the public as well as from within the KMT’s local councilors in a bid to expand her campaign efforts in central and southern Taiwan.

When asked about the speculation that over a dozen KMT legislators have drawn up a petition to have her removed from candidacy, Hung told reporters not to take the rumor “too seriously.”

On Wednesday, Chinese-language newspaper The Liberty Times reported that several party members have threatened KMT’s Central Standing Committee with a petition asking Hung to be replaced.

The presidential contender however refused to elaborate on the subject other than saying that supporters in central and southern Taiwan are warm-hearted and welcoming.

“The last time I was in Pingtung County, I was warmly received by supporters. The media didn’t show it because they were late,” she said.