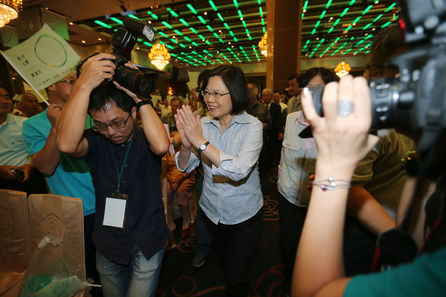 Democratic Progressive Party presidential candidate Tsai Ing-wen pointed out to a group of reporters Wednesday that “the Diaoyutai Islands belong to Taiwan.”

Tsai’s comments came as she plans to visit Japan next month, reports said.

“Our stance is clear. We will say the same thing wherever we go, no question about it,” she affirmed.

According to DPP spokesperson Cheng Yun-peng, Tsai made the initiative as Taiwanese expatriates living in Japan have repeatedly called for a visit by the chairperson.

She will make the visit starting on October 6, where plans to meet with Diet members in Tokyo and also visit Yamaguchi Prefecture, western Japan, to have a look at the regional economy.

When asked about her views on the visit carried out by Chinese President Xi Jinping to the United States, the DPP leader said she has complete faith in that the U.S. will safeguard Taiwan’s interests, however reiterating that she is following closely on the latest developments between the two countries.

Tsai is expected to return from Japan on October 9 to attend the Double Ten National Day celebrations the following day, reports said.