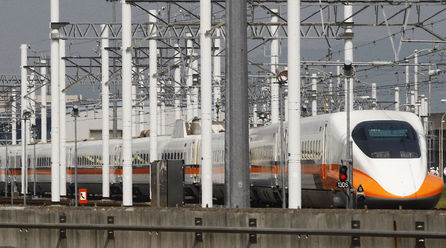 High-speed rail tickets to be lowered in Dec.

The Ministry of Transportations and Communications (MOTC) is expected to approve the revised rail ticket price proposed by the Taiwan High Speed Rail Corporation (THSRC) next month, reports said Sunday.

Three new high-speed rail stations are scheduled to become operational on December 1, with Changhua and two other HSR stations in Miaoli and Yunlin counties added to its existing North-South operating line.

The public will be able to book tickets in advance bound for these new stations beginning November 4, according to the THSRC, disclosing also that ticket prices for the bullet train system are to return to levels seen before a price hike in 2013.

The Taipei-Kaohsiung HSR price will drop to NT$1,490 from the existing NT$1,630, and tickets bound to Miaoli, Changhua and Yunlin from Taipei will be priced at NT$430, NT$820, and NT$930 respectively.

The high-speed rail line will be expanded from the existing eight stations to 11 beginning in December, with 954 train services per week of operation to be increased to 964, the THSRC said.

For trains that include service stops at all 11 stations, the travel time from Taipei to Kaohsiung will take longer from the existing 120 minutes to 138 minutes.

Direct service trains from Taipei to Zuoying, which stop additionally only at Banqiao and Taichung stations, will reach their destinations in the current 96 minutes, the company said.

According to the MOTC, the “early bird” ticket promotion will also be resumed in December, where ticket reservations can be made 28 days in advance beginning on November 4.