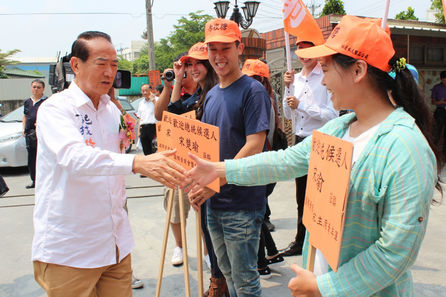 Soong: U.S., Japan will not fight for Taiwan

Speaking on Japan’s passage of its security bills at the upper house of parliament, People’s First Party (PFP) Chairman James Soong said it’s ludicrous to think that the United States and Japan would ever fight for Taiwan in case of war, reports said Sunday.

Soong’s comments came after Japan’s controversial security bills that will allow the country’s troops to fight overseas for the first time since the Second World War, despite widespread voter opposition and mass protests in central Tokyo on Friday.

The PFP chairman was with former speaker of the Taiwan Provincial Assembly Liu Ping-wei when asked about the government’s hope to forge ties with the U.S.-Japan Security Alliance, where the two political veterans met in Taipei on Sunday to exchange opinions and views on the upcoming January 16 elections.

“Every country has its own defense considerations. Should Japan choose to fight overseas, it’s just a way of showing their military prowess, and it has nothing to do with us,” Soong said, adding that in an event of war involving Taiwan, the island is on its own.

Soong said he is skeptical that the U.S. and Japan would ever fight for Taiwan should the government decide to change the status quo, a move that will no doubt anger China.

“It’s a ludicrous idea and a fool’s dream to think that,” he said.

In order to preserve peace and stability across the Asia-Pacific region, the Republic of China needs to play the role of a pacifist rather than antagonist, he explained, adding that Taiwan should not get caught up by competing against China militarily.

“The people on Taiwan wishes for peace in a democratic society, and we aim for a peaceful resolution between the two sides,” Soong told reporters on Sunday.

According to Soong, the ideas and decisions of the Taiwanese people are to be respected, and that both sides should seek consensus and respect differences, with mutual empathy for both sides.

When asked what he would do to help cross-strait relations if elected, Soong said he would call for the Chinese party to withdraw the thousands of missiles pointed at Taiwan, and that he would not alter the status quo of the Republic of China during his time in office.