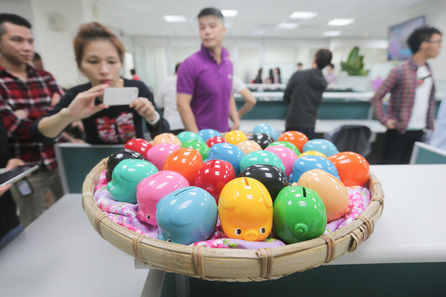 The upcoming January 16 elections is estimated to cost the Democratic Progressive Party between NT$600-700 million (US$20-23 million), Lin His-yao said Thursday, chief campaign director at DPP’s Campaign Strategy Committee. “So far we have managed to raise 10 percent of the estimated fundraising costs,” Lin said, adding that the party’s push for small-scale fundraising will make up for the majority of its campaign donations, and that the DPP does not accept money from corporate sponsors. The party has been giving out small piggy banks to its supporters, encouraging them to fill the banks and return them to the party as a form of small-scale fundraising. The “souvenir version” piggy banks have DPP presidential candidate Tsai Ing-wen’s signature on them, reports said. According to Lin, political contributions made between May 26 and August 31 has amounted to NT$75.66 million (US$2.5 million), of which personal donations make up for the majority. To date, the party’s campaign expenditure has been NT$27.39 million (US$913,000.) “Small-scale fundraising currently account for 99.74 percent of the total donations,” he said. During Tsai’s fundraising campaigns in the 2012 elections, the party had received NT$756 million (US$25.2 million) in net donations, and expenditure was NT$798 million (US$26.6 million), according to the DPP. The chief campaign director said the party has carved up three principle guidelines for next January’s elections – small-scale fundraising as majority (no corporate donations); expenses should not exceed last elections’ expenditure; and total transparency. “We will not accept a dime off corporate sponsors,” Lin stressed, adding that the limit to personal donation is NT$1 million each (approximately US$33,000) The DPP’s fundraising campaign also encompasses the sale of reception tickets during supporters’ gathering held in various localities across Taiwan to generate revenue, or through online donations, and as such. The latest piggy bank fundraising campaign has also proven to be successful, Lin said. The DPP’s income/expense spreadsheet for the 2016 fundraising campaign can be downloaded for public view at: http://iing.tw/posts/118