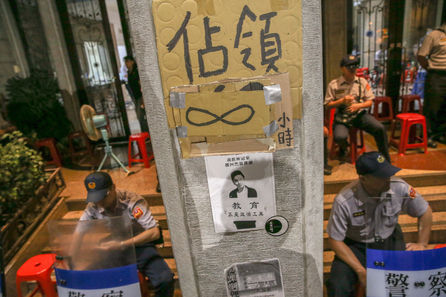 The Ministry of Education (MOE) denied allegations that it has changed the decision to drop charges it made against student protesters, members of the public and journalists for breaking into the ministry's compound in July, reports said Thursday.

The ministry’s comments came after Chen Bo-yu, a student at the National Commercial Vocational Senior High School in Ilan, received a subpoena earlier this week by the Taipei District Prosecutors Office regarding his participation in illegal student activities, including the destruction of government property on July 23.

Democratic Progressive Party (DPP) Legislator Chen Ting-fei condemned the education ministry for making false pretenses, urging its officials to explain publicly the procedures as to when and how the charges were dropped last month.

Prosecutors from the district office however downplayed the gravity of the subpoena, claiming that it only summoned Chen with the intention to have him clarify on several issues concerning the day of the ministry break-in.

MOE’s Executive Secretary Chou Yi-shun told reporters Thursday that the charges on all 33 defendants were completely dropped on September 10, adding that the district office reserves the right to call on anyone for questioning, and that it was beyond the ministry’s power to interfere with the investigation carried out by prosecutors.

Protesters broke into the ministry compound on July 23 after meetings with education officials on controversial high school history curriculum guidelines earlier that day failed to reach a consensus.

The ministry then filed the complaints, and police arrested 33 people at the scene. Among them, 11 were minors and sent to juvenile court before being later released.

“Students can be rest assured that the ministry will not press charges on them,” Yu Chien-kuo said, head of MOE’s Department of Civil Service Ethics.