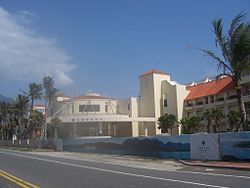 TAIPEI (Taiwan News) – The Miramar Resort Village in Taitung County lost its construction and usage licenses, but it will not yet have to be torn down, reports said Saturday, just days after a court declared a resumption of work on the project illegal.
In the latest turn of events in the long-running saga surrounding the controversial beach hotel, the High Administrative Court in Kaohsiung ruled earlier this month that a Taitung County Government decision in 2013 to resume work violated the law.
Media reports emerging Saturday said the court verdict also concluded that the licenses to build the project and to use it, both issued by the county in 2010, were invalid. However, it rejected a request by activists to tear down the resort, now virtually completed on a beach at Shanyuan.
The court reportedly decided that the opponents of the project should be addressing their demand for its demolition to the county government and not to the court.
Environmentalists said Saturday they were prepared to sit down with county representatives to discuss how to move ahead, with one of the topics certain to be the removal of the buildings from the beach.
However, the county and the developer both said that the latest court ruling was not so important because the process for a new environmental impact assessment report had been started in 2013, and the outcome of that process should first be awaited before any decisions could be made.
For years, the resort has served as the top focus in a battle between environmentalists and indigenous activists on one hand and developers on the other hand. The latter claim the project will bring jobs and development to a relatively poor region of Taiwan, but the former fear it will lead to the destruction of its environmental beauty and typical local culture.