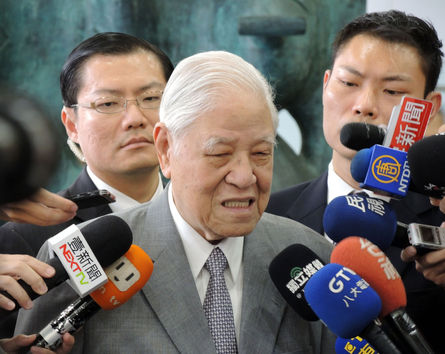 TAIPEI (Taiwan News) – The issue of courtesy payments to former President Lee Teng-hui will be on the agenda of the Legislative Yuan next week, according to a committee decision made Tuesday.
The former head of state infuriated Kuomintang legislators last month by repeating his long-standing claim that the disputed Diaoyutai Islands belong to Japan, and not to Taiwan. The group of uninhabited rocks, known in Japan as Senkaku, form part of Yilan County, according to Taipei, while China also lays claim to them.
The push to rescind the payments grew even louder when Lee said that during World War Two, Taiwanese people did not offer resistance against Japan because it was their motherland.
A proposal by KMT legislator Lu Hsueh-chang to end the payments to Lee was listed as the 13th item Tuesday for the new session of the Legislative Yuan, which begins on September 15.
If one third of lawmakers proposed the ending of the payments and at least half of them voted in favor, former presidents and vice presidents could lose them in the event of treason, rebellion or other activities which damaged the nation’s reputation.
The Taiwan Solidarity Union, which was founded by Lee supporters, said the measure would be misused for purely political infighting and would lead to an endless escalation.
Politicians on the opposition side of the political spectrum have called for similar measures against former Vice President Lien Chan over his controversial presence at China’s military parade last week marking the 70th anniversary of the end of World War Two.
Following Lee’s comments about Diaoyutai, Democratic Progressive Party chairwoman and presidential candidate Tsai Ing-wen emphasized her support for Taiwan’s claims of sovereignty over the islands, which are believed to sit on reserves of fish and oil.