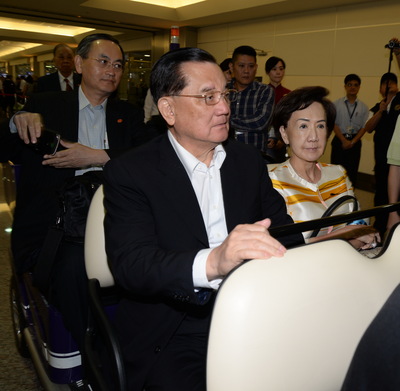 TAIPEI (Taiwan News) – Prominent Kuomintang leaders stayed away from the golden wedding anniversary celebrations for former Vice President Lien Chan and Lien Fang Yu Saturday after his controversial visit to China.
The KMT honorary chairman’s presence at Thursday’s Beijing military parade marking the 70th anniversary of the victory over Japan has been widely condemned in Taiwan, not just by opposition figures but also by government leaders up to President Ma Ying-jeou.
The news that Lien and his wife were to mark their 50 years of marriage with a party Saturday evening almost immediately became a symbol of his political isolation or lack thereof, reports said.
KMT Chairman Eric Liluan Chu said he would not attend the event because of previous engagements taking him around New Taipei City, where he is mayor. Earlier in the week, he said that Lien might have to face the party’s Evaluation and Discipline Committee or its Central Standing Committee.
KMT Vice Chairman Hau Lung-bin and Legislative Speaker Wang Jin-pyng also offered a busy schedule as the reason why they would not be present Saturday evening. Wang said he was traveling to South Taiwan, but had already made over his congratulations to the former vice president. The current holder of the position, Wu Den-yih, would not be present either, reports said.
President Ma, who has had a sometimes difficult relationship with Lien going back to the period when he served as justice minister in a Lien Cabinet and later when he succeeded him as KMT chairman, had not even been invited to the party, according to the Chinese-language Liberty Times.
Reported asked Ma about the report, but the president did not answer.
Ting Yuan-chao, the manager of Lien’s office, said the dinner had been arranged by the former vice president’s children several months ago and would not be a political affair.
There were reports that several prominent business leaders would be present, including Hon Hai Precision Industry Co., Ltd. Chairman Terry Gou, Taiwan Semiconductor Manufacturing Co., Ltd. Chairman Morris Chang and his wife, and Fubon Financial Holdings Chairman Daniel Tsai.
Politicians reported as present included New Party Chairman Yok Mu-ming and retired government officials such as former Examination Yuan President John Kuan.
By 6 p.m., about a dozen supporters of Taiwan Independence showed up outside the hotel where the Lien family and their guests were gathering. The protesters held up signs calling on drivers to honk their horn if they agreed that Lien had colluded with the enemy, reports said. Security was reportedly tight, with people not holding the proper invitation being barred from moving on beyond a certain point. A total of 50 tables had reportedly been booked by the family.