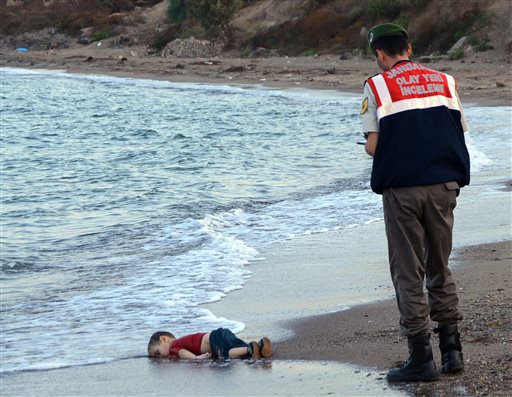 Image of dead child has woken the world

The photo of the dead 3-year-old Syrian boy on a Turkish beach is haunting.

It captures everything we don't want to see when we tap our phones or open our newspapers: a vicious civil war, a surge of refugees, the death of an innocent.

The image of little Aylan Kurdi is hammering home the Syrian migrant crisis to the world, largely through social media. Aylan died along with his 5-year-old brother and their mother when their small rubber boat capsized as it headed for Greece. The Associated Press distributed the photos to its subscribers. The photos were from the Turkish news agency DHA.

"It is a very painful picture to view," said Peter Bouckaert, who as director of emergencies at Human Rights Watch has witnessed his fair share of painful scenes. "It had me in tears when it first showed up on my mobile phone. I had to think hard whether to share this."

But share, he did. Bouckaert, who is in Hungary watching the crisis unfold, said people need to be pushed to look at the "ghastly spectacle" so they can, in turn, prod governments to help the suffering Syrian people.

Still, will the disturbing image galvanize people into action? Will it be like other seared-in-our-memory photographs — a vulture hovering over starving child in Sudan, a girl fleeing a napalm attack in Vietnam, the child in a firefighter's arms after the Oklahoma City bombing?

Or will it become just another of the many images on social media, lost amid the din?

"One of the things about this story is that it's really difficult sometimes for the world to get a handle on it," said Al Tompkins, a senior faculty member at the Poynter Institute, a center for media studies in St. Petersburg, Florida. "Regardless of the technology, a singular iconic image can still touch us in ways."

And that singular image is often of a child. That was the cold fact that unsettled people around the globe.

Kathleen Fetters-Iossi, a 47-year-old fiction writer from Wisconsin, said she hopes people share the images to create awareness, then go beyond that to try to help in some way. But she has her doubts any concrete action will come of it.

"Most Americans, if they're just now becoming aware of this issue, will ultimately feel there's nothing we can do," she said. "They feel like we can't handle our own immigration problem, let alone Europe's. Social media can help by creating wider awareness, but ultimately, 'clicktivism' didn't help the Nigerian girls, and it's not going to help those migrants."

In Greece, Alicia Stallings, a mother of two, said she won't link to the photo. It's too close to home.

"I watch my kids swim and play in the Aegean and am sometimes struck by horror when I think this is the same water in which children just like them are drowning every day," she wrote in an email.

(While Turkish authorities gave the boy's first name as Aylan, an aunt in Canada gave a different transliteration: Alan.)

The photo of the body washed up on the sand was splashed on the front of all major newspapers in Brazil, a nation with more homicides than any other, according to the United Nations. Still, the picture ignited despair and indignation.

Ary Cordovil, a 35-year-old barber, lives near one of Rio de Janeiro's slums, where a drug gang war has meant nobody leaves home after dark and schools have been shut for weeks.

"I'm used to violence. Brazil is used to seeing violence. But this — this is just painful," he said, staring hard at the image in a newspaper. "He's just a baby trying to flee a war. The absurdity of this is extreme even for us."

While the image of the body on the sand was on many international websites, many U.S. sites ran a photo of a Turkish police officer carrying the limp boy in his arms. The boy's face is obscured.

Mike Wilson, editor of The Dallas Morning News, decided to run the tamer photo. He received an email from a reader who said the picture was "gory."

"I wrote back and told her that I appreciated her sensitivity," he said. "We chose it specifically because it wasn't gory. It's just a forlorn, heartbreaking image that tells the reality of what's happening."