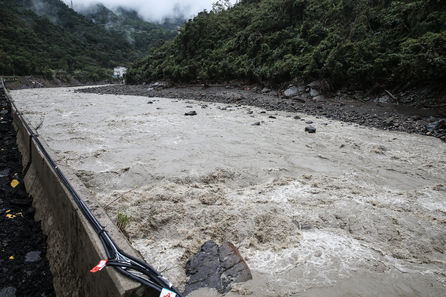 Taipei Mayor Ko Wen-je went on an impromptu inspection of the city’s water treatment plant Wednesday after having held a brief discussion with colleagues from the Taipei Water Department over lunch.

Ko later posted on his Facebook page saying he was still worried after having discovered that the Taipei Water Department is still getting murky water from the Nanshih River.

The mayor urged the Central government to take a decisive action to solve the Nanshih River problem, or the city will otherwise have to deal with turbid water after the next typhoon sweeps across Taiwan.

“I’m worried because the source of the problem can only be resolved through the central government,” he wrote on his Facebook fan page.

“What perturbs me is that the water is still murky even though it hasn’t been raining in the morning,” he lamented.

The turbidity of tap water in Taipei is attributed to poor soil and water conservation efforts upstream of Nanshih River, whose water is transferred to purification plants in the city.

The city had asked the central government to inspect areas upstream of the Nanshih River and make the necessary improvements to the city’s water supplies, according to previous reports.

“The murky water problem will always come back to haunt us unless preservation efforts are strictly adhered to,” Ko said.

So far there has been no response coming from the Central government.