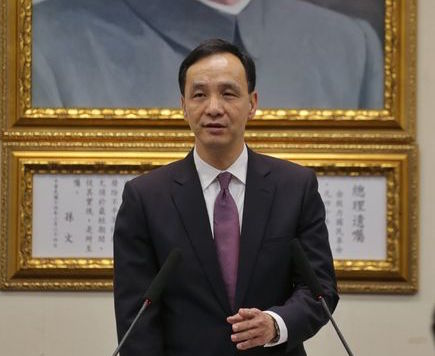 TAIPEI (Taiwan News) – A new member of the Kuomintang’s Central Standing Committee said Wednesday that party chairman Eric Liluan Chu should run for vice president to save the party.
The KMT’s official presidential candidate, Legislative Vice Speaker Hung Hsiu-chu, has been fighting an uphill battle in her bid for the January 16 election. Opposition Democratic Progressive Party leader Tsai Ing-wen has been leading in most opinion polls, while some surveys even put Hung in third place behind People First Party Chairman James Soong as well.
Lee Cho-ping, a member only elected to the CSC last Saturday, said he was planning to propose a motion calling on Chu to join Hung on the ticket as her running mate, reports said.
In his motion, Lee reportedly described how after more than 100 years of history, the KMT was now facing a struggle for its survival. As its chairman, Chu needed to unite the party with different social groups and parties which adhered to a similar ideology, while also emphasizing the need for a “fighting Cabinet” to win the next election, Lee reportedly said. Wednesday saw the first regular weekly CSC meeting since 32 members were elected last weekend, with 26 members being re-elected. According to his biography at the KMT website, Lee has a background with the China Air Lines union.
In addition to a difficult presidential election campaign, the KMT is also fighting to hold on to its majority at the 113-seat Legislative Yuan, which some expect it to lose for the first time in Taiwan’s recent history.
Chu was initially expected to be the frontrunner for the presidential nomination, but the party’s heavy defeat in the November 29 local elections saw him run for chairman and emphasize he would stay away from the presidential election.
Ever since Hung emerged as the winner of the KMT’s primary process, there have been rumors the party would replace her, possibly with Chu. All sides have vehemently denied the reports.