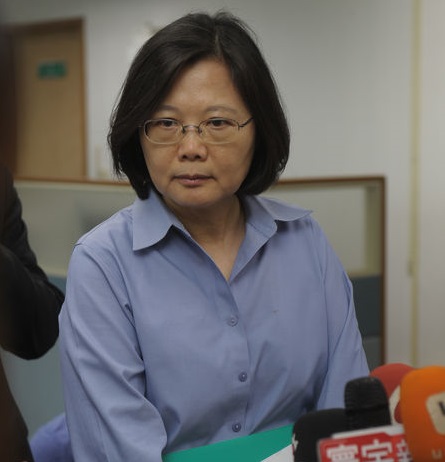 TAIPEI (Taiwan News) – Former Vice President Lien Chan’s comments on the history of the resistance war against Japan could hurt the feelings of people who lived through that era, Democratic Progressive Party presidential candidate Tsai Ing-wen said Wednesday.
Lien has come under repeated fire from all sides of the political spectrum for his decision to go ahead and attend Thursday’s parade in Beijing to commemorate the World War II victory against Japan. Even President Ma Ying-jeou said Lien, still an honorary chairman of the Kuomintang, should not have gone because China describes the Communist Party as the leader of the resistance against Japan.
During a meeting with China’s president and party leader Xi Jinping Tuesday, Lien reportedly agreed with his suggestion that Taiwan and China should write history books together.
The war against Japan was only a few decades in the past and many people who participated were still alive, so their views and experiences about those years should received the necessary respect, Tsai said. Lien’s words were likely to have hurt the feelings and historical memories of those people, she added.
The most controversial part of Lien’s trip was likely to be his presence at massive military parades scheduled for Thursday in Beijing. Critics have pointed out that it is the same Chinese People’s Liberation Army which has more than a thousand missiles targeted on Taiwan and which still threatens to unify the island by force.
President Ma went out of his way last week to tell reporters it was government policy to oppose current and former government officials attending the events in China.
Opposition politicians have said that up to 200 Taiwanese personalities, including three retired generals, might attend the Beijing parade. Calls have been made to take sanctions against those who flouted the government policy, eventually by taking away some of their pension rights.