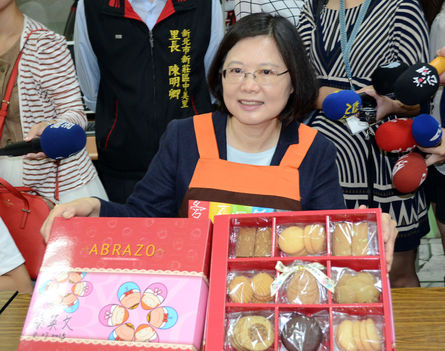 Tsai: not the right time for public debate

Democratic Progressive Party (DPP) Chairperson Tsai Ing-wen insisted that it would be best to stage a televised 2016 presidential debate after the candidacy process is completed in December, reports said Sunday.

“I’m all for a public debate, but it would be better if it was held after we all completed the candidacy procedures,” she said.

Tsai’s comments came during a supporter’s gathering in Taoyuan on Sunday.

When asked by the local media what would be the greatest gift for her upcoming birthday Monday, Tsai said “peace and prosperity.”

Both Soong and Hung have expressed their desire to hold such event, but the DPP contender said she would rather wait for December until the official procedures are dealt with.

Taoyuan City Mayor Cheng Wen-tsan said he aims to bring more than 10,000 supporters during the Sunday gathering, adding that he hopes Tsai will gain more than 80,000 popular votes in Taoyuan during next January’s presidential election.