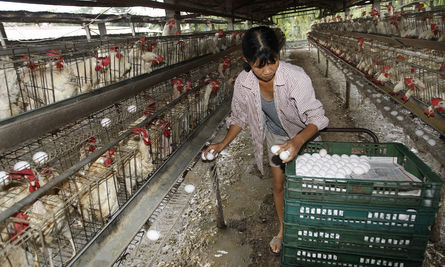 Tyson Foods, one of the world's largest processors and marketers of chicken, beef and pork, as well as meat supplier of McDonald’s in the United States, was under the attack lately for animal cruelty in one of their chicken factory farms.

Animal cruelty and negligence in factory farms are common in the poultry industry. Mercy for Animals, a non-profit animal advocacy organization dedicated to ending the exploitation and abuse of animals, reveals a dirty secret of McDonald’s chicken nuggets.

The investigation into McGinnis Farm, a Tyson Foods contract farm, “carelessly kicking, clubbing, and throwing chickens while thousands of severely sick and injured animals were left to suffer without proper veterinary care or access to food and water.,” the group wrote.

“At this Tyson chicken factory farm, thousands of birds died every day from the diseased and unsanitary conditions. Over the course of only 42 days, more than 52,000 birds died at this one farm from sickness or injuries. Those who survived were carelessly grabbed by their legs, wings, and necks and violently slammed into transport crates before being trucked to slaughter,” said Mercy for Animals.

In Taiwan, the situation for animal welfare is not better. Animal welfare in factory farms has always stirred controversies in the country. In July, factory farms that supply McDonald’s eggs were accused of stuffing hens in barren batter cages. Environment & Animal Society of Taiwan (EAST) pointed out that each enclosed barren batter cage contains 5 hens. All three egg suppliers of McDonald’s use enclosed barren batter cages. Each of them owns 200,000, 120,000 and 450,000 hens respectively. Hundreds of thousands of birds crammed into filthy, tiny cages forced to live for weeks in their own waste and toxic ammonia fumes.

However, Macdonald’s advertisement claimed that all eggs come from hens raised in enriched cages that are up to par with EU standard (1999/74/EC).

EAST called on the public to demand Taiwan McDonald’s to stop using eggs from hens in barren batter cages and switch to cage free eggs, free range eggs or enriched cage eggs. “McDonald’s is a multinational corporation; they should be a role model for other chain companies and carry out their promises on corporate social responsibility and universal declaration on animal welfare,” said EAST.

There are no national laws in Taiwan to protect chickens during their lives on factory farms and Council of Agriculture can only suggest the “Friendly Eggs Production System” guidelines for the egg industry.