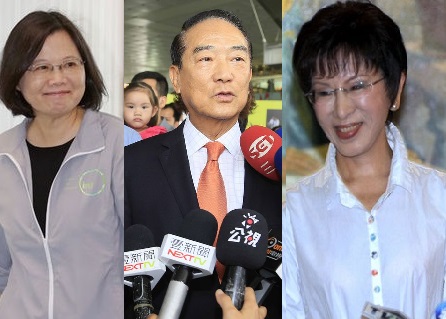 TAIPEI (Taiwan News) – Kuomintang presidential candidate Hung Hsiu-chu would finish third if the January 16 presidential election were held now, according to an opinion poll by Taiwan Indicators Survey Research released Friday.
The survey’s results were similar to some other recent polls, which put Democratic Progressive Party Chairwoman Tsai Ing-wen far ahead in first place with People First Party Chairman James Soong, who only announced his candidacy earlier this month, in second place.
Hung would receive 12.7 percent of the vote, Soong 19.1 percent and Tsai 37.3 percent, according to the TISR survey. A total of 11.9 percent had already decided not to go or to cast an invalid ballot, while 19 percent had not given a clear opinion.
A large proportion of supporters of the “blue” pro-government camp hoped the KMT and the PFP could patch up their differences and present a joint ticket. In this event, 50.6 percent of voters in general wanted Soong to be the joint candidate, while 21.3 percent preferred Hung. When asking only “blue” supporters, the gap was narrower, with the PFP leader receiving a support level of 47.9 percent and the vice legislative speaker 41.7 percent. For KMT supporters, 51.1 percent said Hung should be the joint candidate while 39.8 percent named Soong.
TISR also asked for comparisons between Tsai and Hung on the one side and their predecessors from their own party on the other side.
A total of 56.2 percent of respondents said Tsai would govern better than President Chen Shui-bian, who ran the country from 2000 to 2008 and was later sentenced to 20 years in prison for corruption. He was allowed out on medical parole early this year.
Still, 10.7 percent thought Tsai would do worse, while 6.1 percent did not expect any difference.
On the KMT side, Hung would do better than incumbent President Ma Ying-jeou according to 28.3 percent of respondents, while 29.1 percent expected her to do worse. A total of 15.4 percent told TISR there would be no difference between the performances of Ma and Hung.
Most recent opinion polls have given a commanding lead to Tsai, while leaving Hung and Soong to battle for second place. In most polls, the combined vote of the KMT and PFP candidates remained below Tsai’s total.