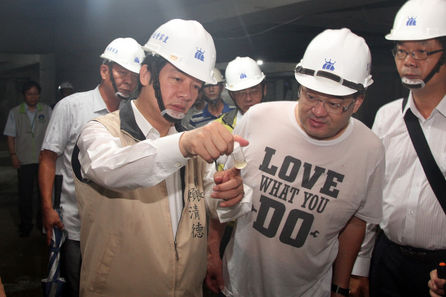 Tainan Mayor William Lai is still mulling over using sea water to combat the dengue fever epidemic that is fast spewing out of control, as the number of patients suffering from the disease this year has reached 2,000, reports said Thursday.

For now, Lai said it is considering using other conventional methods to fight off the outbreak.

According to health authorities, mosquito larvae soaked in sea water with an average salinity of over 30 practical salinity units (PSU) for 12 hours will die.

Despite having proved to be highly effective in Kaohsiung, Lai however said otherwise, attributing to the dengue decline last year to the nearing end of the dengue peak season.

So far the disease has taken 4 lives, while 100 new cases continue to be reported daily, health authorities said.

The Tainan mayor called for the public to remain calm amidst the outbreak, citing government efforts are on the way to help minimize the risks of dengue contraction.

“The only effective way to contain the spread of the disease is by eliminating the environments where mosquitoes breed,” Lai said.

According to the Taiwan Centers for Disease Control (TCDC), the strain of DEN-2 dengue is the dominant strain circulating in Tainan.

Health authorities urged the public to reinforce the removing of vector-breeding sites in and around their residences to ward off infection and ensure their own health and the health of others.