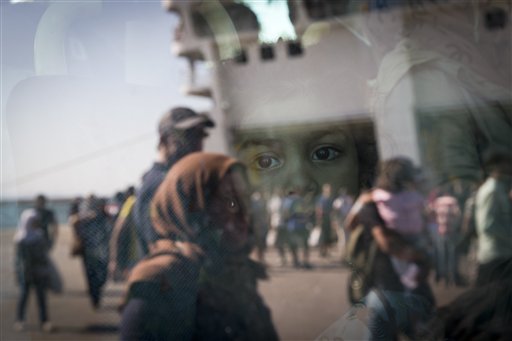 GENEVA (AP) — Record numbers of migrants and refugees fleeing violence and poverty in countries such as Syria, Afghanistan and Eritrea are trying to reach Europe, despite the risks of perilous sea crossings and the inability of countries to provide adequate humanitarian assistance. Here are the latest developments Tuesday:

HUNGARY: Thousands of migrants, many from Syria, poured into Hungary as soldiers frantically tried to finish a border fence to keep them out.

Government officials said a record 2,093 migrants reached Hungary a day earlier — roughly 40 percent higher than the daily average influx in the previous week. Most quickly leave for richer European Union countries like Germany or the Netherlands.

The rush over Hungary's border followed Macedonia's decision to lift a three-day blockade of its border with Greece after thousands of migrants simply stormed past the Macedonian police who tried to stop them with force.

Hungary is working on a 4-meter (13-foot) high fence on the Serbian border to stop the migrants.

"It is in the interest of all of us, Hungarians and Europeans, to develop some kind of order," Kovacs said in an interview, warning that otherwise many European cities could face unsustainable situations.

MACEDONIA: The U.N.'s refugee agency says it expects 3,000 people to cross Macedonia daily in the coming days — and possibly beyond.

Melissa Fleming, spokeswoman for the U.N. High Commissioner for Refugees, says the agency responded to the humanitarian needs of more than 10,000 refugees and migrants who arrived from Greece over the weekend, largely aiming to travel through to Serbia and beyond. Most are fleeing violence in Syria, Iraq and Afghanistan.

Fleming told reporters in Geneva on Tuesday that Macedonia's refugee situation has "calmed significantly from the chaotic scenes" seen on many TVs last week, though it remains a concern.

Meanwhile, UNICEF said that over the past month, about 1,500 to 2,000 people on average have crossed Macedonia each day — about one-third of them women and children.

Francois Crepeau, the U.N. special rapporteur on the human rights of migrants, says EU members should focus on controlling but not sealing borders, fighting anti-migrant sentiment and ensuring that migrants and asylum-seekers can move around, get jobs and integrate.

Crepeau said EU officials should do more to counteract people-smugglers and create a massive resettlement program for refugees fleeing violence and persecution from places like Eritrea and Syria.

GERMANY: The Federal Office for Migration in Germany — a country that has taken a leading role in welcoming refugees in the EU — is advising officials who process their arrivals not to send people from Syria back to other European countries.

Under the so-called Dublin procedure, refugees are meant to apply for asylum in the first EU country they land in — often Greece or Italy. But those countries have been overwhelmed by the influx, and have allowed many migrants to continue to northern Europe.

Spokesman Christoph Sander told the AP on Tuesday that the new guidance isn't legally binding. But even before, immigration authorities had sent only 131 Syrians back to other European countries.

Rahma Abukar Ali, 33, was among 453 migrants aboard four ships rescued in the Mediterranean by a British ship Saturday and transferred to the German ship Sunday. Her baby Sophia — 49 centimeters big and weighing 3 kilograms (19.3 inches and 6.6 pounds) — was the first to be born on board a German navy ship.

GREECE: Two Greek coast guard vessels searched waters off the island of Lesbos for four people missing after a dinghy carrying migrants or refugees capsized while making its way across from the nearby Turkish coast.

The search continued Tuesday after the coast guard recovered two bodies and rescued six people a day earlier. The incident came to light when a fishing boat picked up a man found in the sea.

The body of a third man was also recovered Monday night, but from a different part of the island, leading authorities to suspect a separate incident.

Greece has been overwhelmed by more than 160,000 refugees and migrants so far this year. The vast majority arrive in Lesbos.

Speaking on public TV, Andrej Babis called the migrants — most of whom are fleeing bloody conflicts — "the biggest threat to Europe."

The Czech Republic has not faced as large an influx of asylum-seekers as some other EU countries have recently, though numbers have been rising. In June, the country helped block a proposal for EU countries to take in set numbers of the refugees arriving in the bloc.