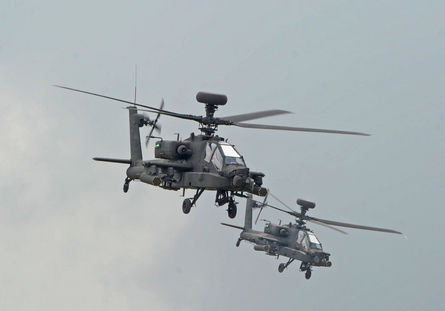 TAIPEI (Taiwan News) – The Apache attack helicopter will go on show for the public on October 24 at the Zuoying Navy Base in Kaohsiung, the Ministry of National Defense announced Tuesday.
The decision followed a public outcry about last week’s decision by prosecutors not to charge 15 people over an officer inviting civilians to an Army base last March. The decision led to people turning up at the base’s gates and demanding to be given a tour of the helicopters.
The well-known naval base at Zuoying would be open to the public on October 24, and on the occasion visitors would be able to see the United States-built Apache AH-64E helicopters, a military spokesman said Tuesday.
On November 21, the Air Force Base in Hsinchu would also be holding an open-door day during which the Apache craft would be on view, he said.
The military could not allow individuals to enter just any defense installation, but registered social organizations, associations, schools and clubs could file applications with the military for a visit which could be granted or not, according to the ministry spokesman.
Individuals with citizenship in China, Hong Kong and Macau were not allowed in military installations, a fact which caused legal problems for movie director Doze Niu, who allowed a Chinese member of a filming crew to enter the Zuoying base under a false identity.
Politicians and election candidates wearing campaign vests or trying to canvas votes would also be kept off military domains, the spokesman said.
Entertainer Janet Lee brought what became known as the “Apache scandal” to light by posting pictures of herself in front of and inside an Apache helicopter at a military base on her Facebook page last March 29. The images stirred up a public outrage and doubts about the security at sensitive military installations.
Lee and more than a dozen other civilians, including spouses with children and nurses, had been invited to the base in Longtan, Taoyuan City, by Lieutenant Colonel Lao Nai-cheng, the deputy head of the Army helicopter squadron.
He was among several officers slapped by demerits and targeted for sanctions by the Control Yuan, but Taoyuan District prosecutors said on August 21 they would not take legal action against anybody involved because they did not rate the Longtan base to be an especially sensitive military installation.