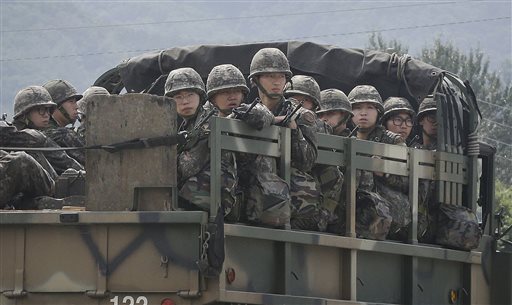 South Korean officials say they will hold talks with officials from North Korea on Saturday in a bid to defuse tensions.

The meeting will take place at the border village of Panmunjom at 6 p.m. Seoul time (0900 GMT), which is 30 minutes after the deadline set by Pyongyang for Seoul to to dismantle loudspeakers broadcasting anti-North Korean propaganda.

In Pyongyang, businesses are open as usual and street stalls selling ice cream are crowded as residents took breaks under parasols from the summer sun. There are no visible signs of increased security measures, though the city is even under normal situations heavily secured and fortified.

The North's state-run media has strongly ratcheted up its rhetoric, saying the whole nation is bracing for the possibility of an all-out war. Leader Kim Jong Un has been shown repeatedly on TV news broadcasts leading a strategy meeting with the top military brass to review the North's attack plan and young people are reportedly swarming to recruitment centers to sign up to join the fight.

People were willing to talk about the tension and, as is common in public in North Korea — officially called the Democratic People's Republic of Korea — they voiced support for their government's policies and their leader. They also used phrases like "puppet gangsters" to refer to South Korean authorities, as these are everyday terms in the North, in state media and conversation.

Said Pyongyang citizen Choe Sin Ae: "I think that the South Korean puppet gangsters should have the clear idea that thousands of our people and soldiers are totally confident in winning at any cost because we have our respected leader with us."

South Korea has blocked access to a tourist observatory close to the border with North Korea, in response to escalating tensions between the two rivals.

The Dora Observatory looking across the Demilitarized Zone was shut down by security forces.

However, most South Koreans are going about their daily life and highway traffic is normal. North Korea also permitted more than 240 South Koreans to enter a jointly-run industrial complex at its border city of Kaesong on Saturday.

North Korea says it's ready for an "all-out war" against South Korea as a 5:30 p.m. (0830 GMT) Saturday deadline approached set by Pyongyang for Seoul to dismantle loudspeakers broadcasting anti-North Korean propaganda along their border.

On Thursday, South Korea fired dozens of artillery rounds across the border, saying North Korea had fired first to back up a threat to attack the loudspeakers.

North Korea says it's ready for an "all-out war" against South Korea as a 5:30 p.m. (0830 GMT) Saturday deadline approached set by Pyongyang for Seoul to dismantle loudspeakers broadcasting anti-North Korean propaganda along their border.

The warning by North Korea's Foreign Ministry came after North Korean leader Kim Jong Un on Friday declared his front-line troops in a "quasi-state of war" and ordered them to prepare for battle. South Korea on Thursday fired dozens of artillery rounds across the border, saying North Korea had fired first to back up a threat to attack the loudspeakers.

In a statement carried by North Korea's official Korean Central News Agency, the Foreign Ministry says North Korean soldiers and people are "poised not to just counter-act or make any retaliation but not to rule out an all-out war to protect the social system, their own choice, at the risk of their lives."

Seoul recently resumed the anti-Pyongyang border broadcasts for the first time in 11 years after it accused the North of planting land mines that maimed two South Korean soldiers earlier this month. Seoul has vowed to continue the broadcasts.

North Korea's deputy U.N. ambassador says "a strong military counteraction will be launched" if South Korea does not meet a Saturday deadline for removing loudspeakers broadcasting anti-North Korean propaganda along their border.

"I would say that our military will not make any empty talks," Ambassador An Myong Hun told reporters.

An says North Korea has asked for an urgent meeting of the U.N. Security Council to discuss issues including the current U.S.-South Korea military exercises, which were briefly suspended.

The letter to the Security Council president accuses South Korea and the United States of "fabricating" the land mine incident that led to the current escalating tensions.

The Pentagon says America's annual military exercise with South Korea has resumed after being stopped as a result of escalating tensions and threats of war from Pyongyang.

David Shear, the assistant secretary for Asia issues, says the exercise was temporarily halted so that the U.S. and South Korea could talk and coordinate over the recent exchange of artillery fire across the border.

He says U.S. forces are at an increased security status for the exercise and that the U.S. is continuing to monitor the situation closely.

U.N. Secretary-General Ban Ki-moon has expressed deep concern over rising tensions between North and South Korea and urged them to engage in dialogue to promote peace.

Tensions have escalated since South Korea accused rival North Korea of shelling a border town on Thursday and retaliated with dozens of artillery rounds. North Korea has threatened further action unless Seoul ends loudspeaker broadcasts of anti-North Korean propaganda at the border.

North Korea's ambassador to Russia has accused South Korea of lying about alleged North Korean artillery strikes and asked for the world's help in defusing rapidly growing tensions between the two countries.

At a news conference in Moscow on Friday, Ambassador Kim Hyun Joon attributed the tensions to what he called military and political provocations by the United States and South Korea.

He repeated North Korea's threat of military action if South Korea does not meet a Saturday deadline for removing loudspeakers along their border that recently resumed broadcasting anti-North Korean propaganda after a lull of 11 years.

South Korea has vowed to continue the broadcasts, which were restarted after it accused North Korea of planting land mines in the DMZ along their border that maimed two South Korean soldiers.

The officials say the U.S. is monitoring the situation, but hasn't taken any other military steps. It was unclear if the exercise would resume.

North Korean leader Kim Jong Un on Friday declared his front-line troops in a "quasi-state of war" and ordered them to prepare for battle against South Korea in response to an exchange of artillery fire on the border Thursday.

The annual exercise began Monday and was slated to end next Friday.

The officials spoke on condition of anonymity because they weren't authorized to discuss the matter publicly.