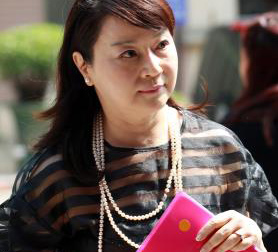 TAIPEI (Taiwan News) – Talk show host Clara Chou was found guilty of defamation Friday and ordered to pay tycoon Terry Gou NT$2 million (US$61,000).
The dispute has its origin in last year’s mayoral campaign in Taipei City. After the election, Chou alleged that Gou was the businessman alleged to have given NT$300 million (US$9.2 million) in illegal donations to the losing candidate, Sean Lien of the Kuomintang.
The Taipei District Court found her guilty because she never bothered to verify the claims with Gou himself. In addition to the fine, the court also ruled she should publish apologies on the front page of seven major newspapers and on a Chinese-language web site. Appeals are still possible. The Hon Hai Precision Industry Co., Ltd. chairman had demanded NT$10 million (US$306,000) in compensation.
Chou said in an online statement that she would appeal Friday’s sentence all the way.
During the court hearings, it came to light that during his campaign, Taipei City Mayor Ko Wen-je had apparently misinterpreted a comment from top opposition lawmaker Ker Chien-ming as alleging that an unnamed person had donated NT$300 million to Lien. Ko publicly made comments to that effect after he was elected, but he never named the identity of the donor. It was Chou, who spent most of the campaign criticizing Lien on a range of talk shows, who was the first person to identify Gou as the alleged donor.
Gou and Ker told the hearings that the misunderstanding probably stemmed from a donation the Hon Hai Precision Industry Co., Ltd. chairman made to the previous mayor of the capital, Hau Lung-bin, to fund a Taipei pavilion at the 2010 World Expo in Shanghai.