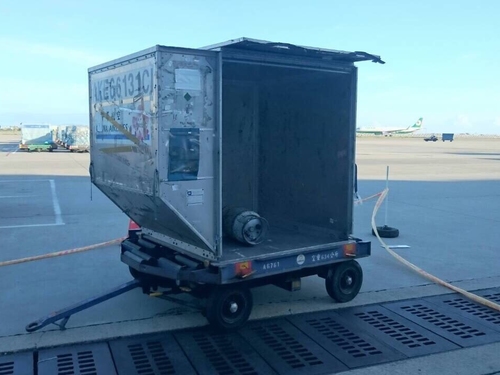 A pressurized gas tank left in the cargo of a returning China Airlines Flight CI-003 from San Francisco raised the panic button at the Taoyuan International Airport as police and a bomb crew raced over to the tarmac to inspect the suspicious cargo, reports said Thursday.

Preliminary investigation showed that the cylinder is a fuel tank used for dolly trucks at the San Francisco airport, according to China Airlines.

The unit load device (ULD) carrying the tank was immediately towed to an apron to be examined before a bomb crew arrived.

The security scare turned out to be a false alarm after authorities concluded that there was nothing irregular about the abandoned cylinder.

The airline company is in contact with its ground handling counterparts in California as to why the ULD containing only the cylinder was loaded onto Flight CI-003, which arrived at 5:05a.m. Thursday in Taoyuan.