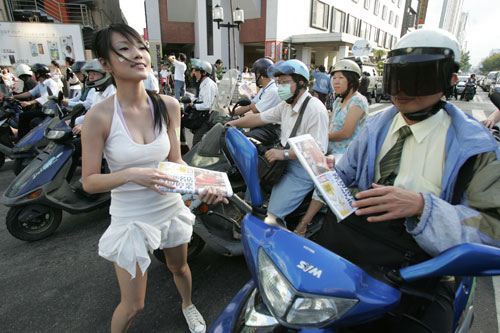 Bevies of scantily clad young women descended on subway stations in Taiwan's capital yesterday, handing out a free commuter newspaper from one of Southeast Asia's feistiest and most innovative media companies.
The debut of Sharp Daily, an offshoot of Hong Kong tycoon Jimmy Lai's wildly successful Apple Daily, came just months ahead of an expected tender from Taipei's rapid transit system for a free product to serve the needs of the city's commuters.
Jerry Chen, commercial director of the Taiwan branch of Apple Daily Publication Development Limited, said the new paper - known in Mandarin as "Shuang Bao" - was intended to put the company in a strong position to win the tender.
"Certainly that's one of our goals," he said. "We very much hope we can do it."
Chen said the initial circulation run for Sharp was 200,000, about six times the figure attained by Cola Daily, another commuter-oriented paper launched by the United Daily News about two years ago.
He said Sharp would emphasize the same mixture of entertainment, crime news and sensational gossip and scandal that has helped to catapult Apple to the leading ranks of Taiwanese newspapers in only three years.
Chen put Apple's circulation at 526,000, slightly ahead of Liberty Times, and about 120,000 copies more than United Daily News and China Times, Taiwan's other main daily newspapers.
Condensed version
The leading story in Sharp's inaugural edition yesterday was about a famous Taipei restaurant forced to close its doors after authorities allegedly discovered it had been evading taxes.
Chen said the paper's main thrust would be to present a condensed version of Apple - minus its sports and business news - that could be read by consumers in about 30 minutes.
"We think the commuter market is potentially very big," he said. "It's really a new market and we want to get in on it early."
Sharp's inaugural edition contained 32 pages, about 40 percent of which was devoted to advertising. Chen said the paper's target was to take in NT$20 million (US$625,000) per month in advertising revenue, more than enough to put it in the black.
Chen called the paper's expenditures "low," without putting a specific amount on them. He said that costs were held down by Sharp's use of Apple's printing facilities and a small portion of its editorial staff.
Since its debut in the spring of 2003, Apple Daily has taken Taiwan by storm, parlaying the same formula of celebrity gossip, gory crimes and bloody accidents that has made its Hong Kong flagship paper such a runaway success.
Both papers emphasize eye-catching graphics and splashy layout to attract sales from newsstands rather than paid circulation.
Chen said the Taiwan paper sold about 90 percent of its copies via the newsstand route - far higher than the 50 percent achieved by its main competitors.