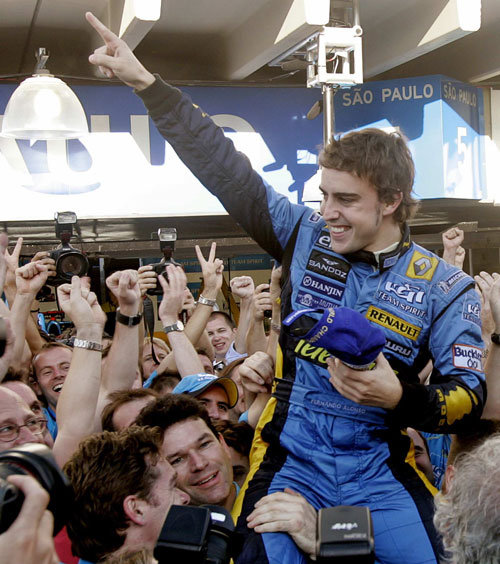 The first Spaniard to win the Formula One drivers' world championship, Fernando Alonso, established himself as one of the greats on Sunday when he retained his title by finishing second in the Brazilian Grand Prix.
Alonso, 25, has succeeded due to a combination of his natural speed and competitive instincts allied with supreme race-craft and an iron will to win.
His success ensured there was symmetry to the passage of glory and success at the highest levels of Formula One.
As the great Michael Schumacher, a seven-times champion, retired after racing for the last time in Brazil, within a short taxi-ride of Ayrton Senna's grave at Morumbi, so Alonso claimed his succession as a multiple champion on the Interlagos track.
Like Senna and Schumacher before him, Alonso's career began in karting when he was a child, developed as a teenager and peaked when he entered Formula One.
Career similarities
Indeed, there are many similarities in the careers of Schumacher and Alonso - both went through karting to single-seater racing, both love football, both won their first two successive Formula One drivers' titles under the guidance of Italian team chief Flavio Briatore and both then departed for 'bigger' teams.
While Schumacher left for Ferrari, after winning the 1994 and 1995 titles, Alonso will leave for McLaren, after winning the 2005 and 2006 titles, taking with him the coveted number one.
Similarly, just as Schumacher became the first German to win a Formula One race and then to win the drivers' title, so too did Alonso, whose modern, slightly understated image has made him a pin-up in his native Spain.
He is engaged to Raquel del Rosario, the lead singer of the Spanish pop group El Sueno de Morfeo.
And just like Schumacher, Alonso has quickly earned plaudits from seasoned observers.
"It's too early to call him legendary, but he has that shine to him," said the 1996 world champion Briton Damon Hill. "He certainly has the ability."
Another multiple champion, Briton Jackie Stewart, said Alonso was not only an "exceptional talent," but also Formula One's latest "genius" because of his combination of talent and mind-management.
Next season, Alonso will face his first serious test as a champion when he leaves Renault for McLaren, a team that has struggled for consistency and reliability in recent years.
A private and self-contained man with a rich sense of humour, he loves playing football, is a keen fan of Real Madrid and enjoys learning magic tricks to play on his friends.
He may need all of those attributes if he is to follow the Schumacher example again and revive a team that is in the doldrums and turn them into a dominant force.
No doubt about title
Fernando Alonso was virtually assured of his second Formula One championship barely 15 minutes into the Brazilian Grand Prix.
He didn't know why his team was asking him to turn down the power of his engine so early in Sunday's race.
Then he soon found out. His only rival for the world title, Michael Schumacher, punctured a tire and dropped to last.
Alonso retained the championship when he was second to Felipe Massa in the season finale which also marked the end of Schumacher's mighty career.
"The important thing today was to become champion again for the second time and we did it," Alonso said. "Yes, it has been a fantastic weekend, especially the race."
Schumacher, a seven-time F1 champion, needed to win his final race before retirement to keep alive his remote chance of another title. But the German punctured a tire less than 10 laps in, dropped out of contention, and drove well to salvage fourth.
"I have been told my tire was cut but I didn't feel any contact. The only thing I really felt was my tire was done," Schumacher said.
Alonso heard about it from his team.
"Well, first of all they told me to drop the revs," he said "Then they said he was back in 19th."
Massa, Schumacher's Ferrari teammate, won the race from the pole before an adoring home crowd at the Interlagos circuit.
His second career victory was also the first by a Brazilian here since Ayrton Senna in 1993.
"I think it is a dream come true. I always dream to have this day," Massa said. "And I got it.
"It was the easiest race of my life since I have such an incredible car."
Honda's Jenson Button was third.
As soon as Alonso crossed the finish line, the Spaniard thanked his crew over the radio in French (Renault's engines are built in France) and English (the team is based in Britain). He helped Renault also clinch the constructors' title but will race for McLaren next year.