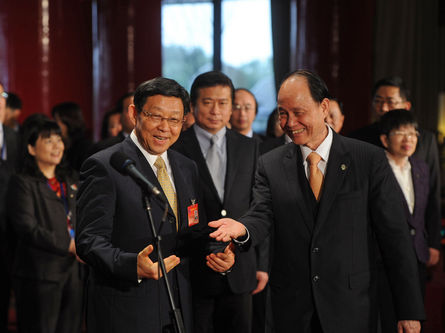 MAC gears up for cross-strait summit

A seminar will be held Tuesday morning in preparation for the upcoming Cross-Taiwan Strait Summit, according to the Mainland Affairs Council (MAC) on Monday.

The 11th summit between Taiwan's Straits Exchange Foundation (SEF) and China's Association for Relations Across the Taiwan Straits (ARATS) will hopefully be held in Fuzhou, the capital of Fujian Province before the end of August.

The two organizations are expected to sign a tax agreement and an aviation safety cooperation agreement, reports said.

Last week, SEF Vice Chairman Chou Jih-shine said that the contents of the two proposed agreements have passed national security screening and have been discussed at public hearings, but he added that the wording and phrasing need further review.

When asked about the proposed agreement that would allow travelers from China to use Taiwan as a transit stop, Chou said there have already been back-and-forth negotiations between both sides, however adding that a consensus still has to be reached.

The cross-strait summit is held every year to promote trade relations between Taiwan and China. The last round of talks was held in Taipei.