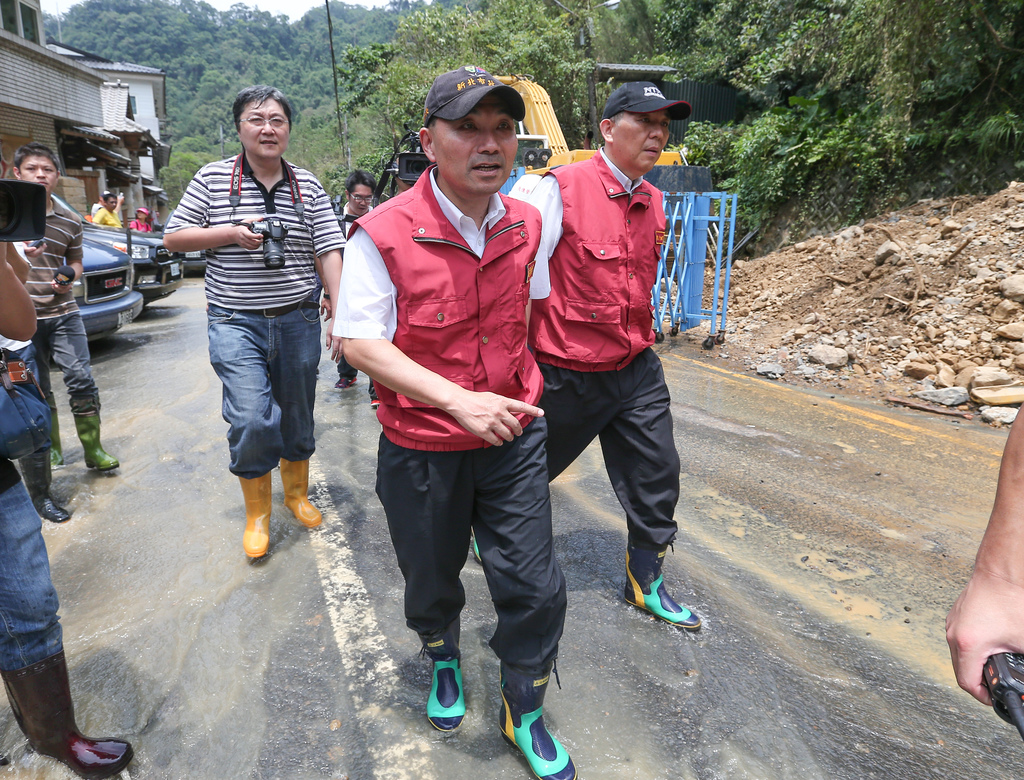 TAIPEI (Taiwan News) – New Taipei City Vice Mayor Hou Yu-ih was cut off from the outside world for a time Tuesday afternoon after a road near the devastated district of Wulai collapsed.
Following the passage of Typhoon Soudelor last weekend, the mountainous New Taipei district turned out to have suffered serious damage. The area is popular as a weekend destination for its hot springs and indigenous culture.
Hou and New Taipei fire department chief Huang Te-ching were part of a delegation of officials visiting the area when the road reportedly collapsed again after a first round of repairs. Nobody was reported injured, however.
Hou and the members of his delegation reportedly walked around the spot, at the 10.2 kilometer mark of Highway No.9, and waited outside for transportation out of the area.
By 4 p.m., the road had been repaired and rescue teams were able to move back in, reports said. Hou said that the New Taipei City Government, the military and private groups would do their best to disinfect the area within three days in order to prevent disease from breaking out.
Police have blocked off Xinwu Road, the main thoroughfare connecting Wulai with the populous district of Xindian, in order to facilitate the passage of heavy equipment to rebuild the road. The blockade has led to angry incidents between residents of Wulai who say they want to return to pick up goods from their homes.
Local officials say that only if Xinwu Road was repaired, could there be any talk of the district gaining back its fame as a tourist destination. Many residents were evacuated over the past few days, including an Indian family which ran a restaurant in the area, according to local media reports.
Heavy rain during Tuesday afternoon in some parts of New Taipei made rescue and repair efforts even more difficult, while three more people were reported missing in the Wulai area. Earlier in the day, a father and son who had gone missing from the Sanxia District during the typhoon were found dead near the Danshui River mouth in Bali District, reports said.