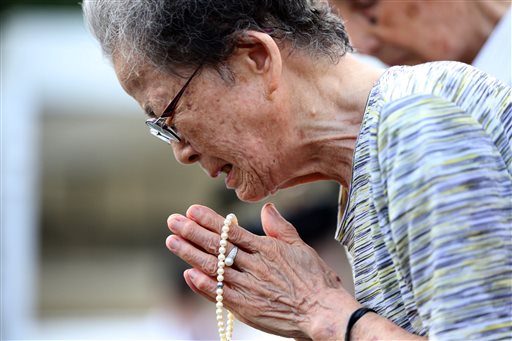 NAGASAKI, Japan (AP) — A ceremony is underway Sunday morning in Nagasaki to mark the 70th anniversary of the atomic bombing of the southern Japanese city.

Survivors, guests from 75 countries and others are gathered under a tall white canopy to shade them from the sun at the annual commemoration at Nagasaki Peace Park.

As a bell tolled, they observed a minute of silence at 11:02 a.m., the time when the U.S. dropped the atomic bomb, killing more than 70,000 people and prompting Japan's World War II surrender. The first atomic bomb in Hiroshima three days earlier killed 140,000.

The city's mayor was expected to renew his call for a world without nuclear weapons.