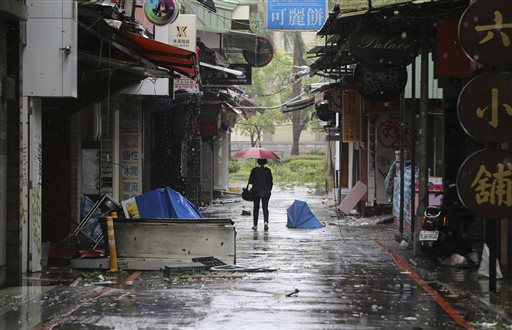 BEIJING (AP) — A typhoon that left 10 people dead or missing in Taiwan weakened Sunday as it battered southeast China, collapsing homes and trees and leaving more than a million homes without power.

Typhoon Soudelor hit the city of Putian in Fujian province late Saturday night and was downgraded into a tropical storm as it moved across the province.

The Fujian Civil Affairs Department said that it collapsed 36 houses and damaged 281 others. Authorities said they had evacuated more than 370,000 people and ordered around 32,000 boats back to port before the typhoon made landfall.

State broadcaster showed people wading in knee-deep water in the provincial capital of Fuzhou and said that the water in some flooded streets was as deep as 80 centimeters (30 inches).

No casualties were reported, unlike in Taiwan, where the National Fire Agency said five people died, five are missing, and a further 185 were injured. The dead or missing included an 8-year-old girl, her twin sister and their mother who were swept out to sea, a firefighter who was killed and another injured after being hit by a drunken driver as they attempted to move a fallen tree.

The storm downed trees, traffic lights and power lines on the island, causing more than 4 million households to lose electricity. A total of 534 international and domestic flights were canceled or delayed.

In Fujian, strong winds caused power outages to more than 1.41 million households even before the storm made landfall, the official Xinhua News Agency said. More than 7,000 soldiers and police were on standby, provincial authorities said.

Flights to Fuzhou and the city of Quanzhou were canceled, and about 100 trains running through the coastal city of Xiamen suspended services, Xinhua said.

On Friday afternoon, marine police rescued 55 university students and teachers trapped on a small island where they had been attending a summer camp, after strong gales stopped ferry services, Xinhua said.