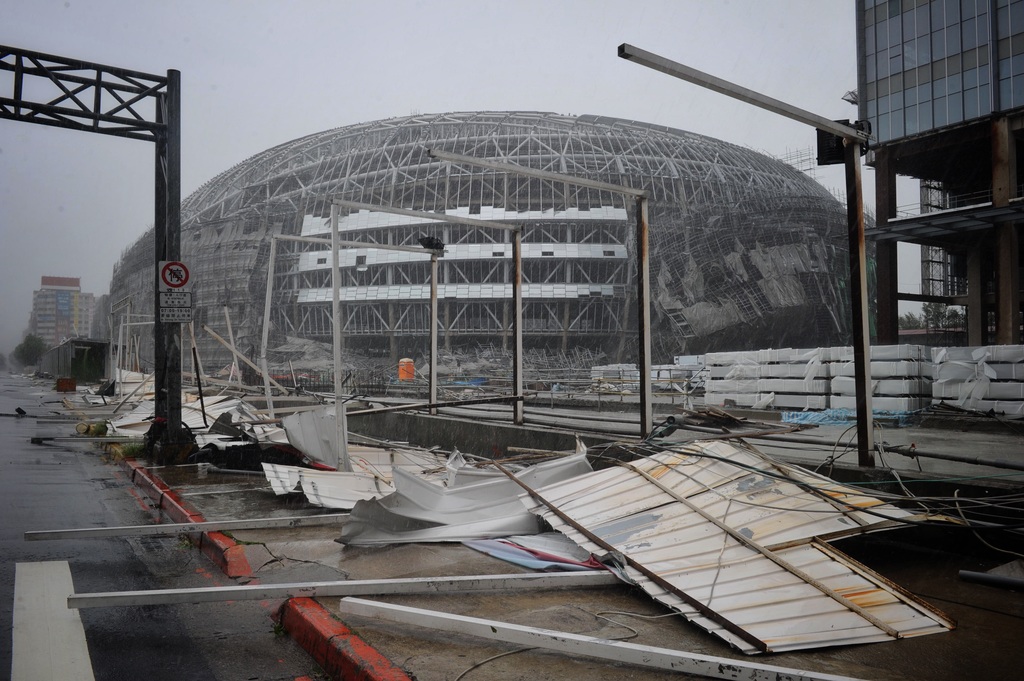 TAIPEI (Taiwan News) – Taipei Dome developer Farglory Group will face a fine of NT$90,000 (US$2,800) after pieces of sheet metal were blown into a nearby road during Typhoon Soudelor, the Taipei City Government said Saturday.
The typhoon, which made landfall on Taiwan’s east coast at 4:40 a.m. and left from Yunlin County more than six hours later, brought damage to buildings and trees nationwide.
From 10 p.m. Friday, security staff at the unfinished Taipei Dome found six to ten pieces of sheet metal to have been blown off the complex, according to the city’s urban development chief, Jou Min Lin.
As a result of the incident, traffic restrictions came into effect on nearby Zhongxiao East Road and Keelung Road, he said.
The official said that the city had already been paying attention to the sheet metal on the roof of the 40,000-seat stadium. Once the typhoon had gone, Farglory would be asked to remove the potentially dangerous elements, he added. The company reportedly pleaded that a shortage of staff had prevented it from taking down the sheet metal.
Taipei City Mayor Ko Wen-je blamed Murphy’s Law for the incident, saying that the city had considered ordering the removal of the pieces, but because only 3 percent of the relevant work on the roof had been completed, it did not go ahead with the order.
Ko’s administration and Farglory tycoon Chao Teng-hsiung have been at loggerheads over the Taipei Dome for months, quarrelling about the safety, the environmental impact and the financial implications of the project. Essential safety work was recently completed, but otherwise work on the Dome has stopped. Chao is also pursuing a legal case against the mayor for defamation.