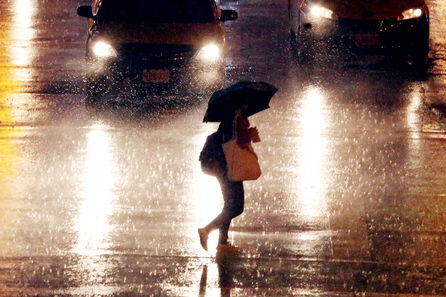 TAIPEI (Taiwan News) – As Typhoon Soudelor battered its way through Central Taiwan Saturday, at least five people were reported dead, while a record 3 million homes lost power and transportation came to a standstill.
The storm made landfall on the east coast at 4:40 a.m. and left the island from Yunlin County moving into the Taiwan Straits around 11 a.m., the Central Weather Bureau said.
The five casualties included a mother and a child who had gone swimming near Suao in Yilan County before the typhoon arrived. Late Friday evening, a man in Suao was hit by a falling billboard. A fire fighter who died after he was hit by a car as he was clearing debris from fallen trees was initially counted as a victim of the typhoon, but later removed from the list because the driver who hit him had been drinking too much, reports said.
During the afternoon, a man in Kaohsiung was reported dead after he had been hit by a falling tree, while an elderly man in Sanxia, New Taipei City, died after having been pulled out of a mudslide.
Four persons were also reported missing and 185 were injured. There were reports of flooding, mudslides, fallen trees, billboards and scaffolding from all over the country.
In the mountainous Wulai District of New Taipei City, mudslides hit homes, with a family of seven narrowly escaping being buried alive, reports said. In the Sanxia District, a family of five was evacuated from the second floor of their flooded home. At least one man was reportedly swept away by a river, with a 10-member Japanese rescue team joining the search.
A landslide also buried ten homes in an aboriginal village in the Taoyuan City district of Fuxing, but all residents had been evacuated on time, reports said.
Several pieces of sheet metal were reported to have been blown off the Taipei Dome project, landing on nearby Zhongxiao East Road. The normally busy street was almost empty due to the storm and no injuries were reported. In another part of the capital, the Miramar ferris wheel spun out of control, but the area had been closed to the public.
Pictures came in of a motorcycle flying through the air as it became snagged in an advertising banner in Kaohsiung and of the pedestals of post office boxes bent by the wind in Taipei.
The strong winds also caused havoc with public transportation and power supply. In Taipei, trains stopped running on elevated and surface parts of the Mass Rapid Transit system, in particular the Danshui Line north of Yuanshan station and the Wenhu Line. The Danshui Line and bus service in the capital resumed service at 6 p.m., reports said.
All national rail traffic was suspended until at least 6 p.m. Saturday, the Taiwan Railways Administration said. The main line along the western coast, in the north and east to Yilan would remain shut down all day long.
A freight train was blown off the tracks at Hanben Station near Suao, according to cable television footage. No mention was made of any injuries.
The high-speed rail system also closed down, with the removal of fallen objects from the tracks forcing a suspension of service at least until 7 p.m. Saturday. From 7 until 10 p.m., there would be three trains per hour in each direction, with extra trains to and from Taichung, the operator said. Service on the normal and the high-speed rail would return to normal on Sunday morning.
The total number of households without electricity during the storm reached a record level of more than 3.84 million, but the number was brought down to 1.41 million by early Saturday evening, reports said..
In Taichung, six wind turbines collapsed because of too strong winds, reports said. Nobody was reported injured by the fall of the 30-meter-tall pylons.
During typhoons, department stores and movie theater complexes are usually packed with crowds seeking refuge from the storm, but on Friday most major shopping complexes announced they would be closed for most of the day. Restaurants also faced a serious loss of business as Saturday August 8 was Father’s Day in Taiwan.
The Taipei Zoo needed an extra day off Sunday so staff could clear away the fallen trees, reports said. More than 2,000 trees were uprooted in Taipei City alone.
By 6 p.m., the eye of Typhoon Soudelor was situated 90 kilometers north-northeast of Penghu over the Taiwan Straits and moving west-northwest at a speed of 18 km per hour. The average wind speed fell to 137 km per hour, with gusts of up to 173 km per hour, down from more than 200 km per hour Friday evening. During the evening, the eye reached the coast of China’s Fujian Province, but the typhoon’s influence would still be felt in Taiwan through the night.
The threat of flooding and landslides remained, since torrential rain and strong winds might continue well into Sunday morning, reports said.
Floods were still likely to threaten large parts of the country from the far north to the south, according to the Central Weather Bureau. New Taipei City alone ordered the closure of 14 bridges threatened by flooding, but bridges and roads were closed off preventively in many mountainous parts of the country.
The strongest winds were recorded in Suao, while Taiping Mountain, in Yilan County’s Datong District, received 1,275 mm of rain over two days.
Schools and offices would still be closed Sunday morning in Penghu and Kinmen, while certain disaster areas in Taoyuan, Kaohsiung, Yunlin and Taitung would have the full day off.