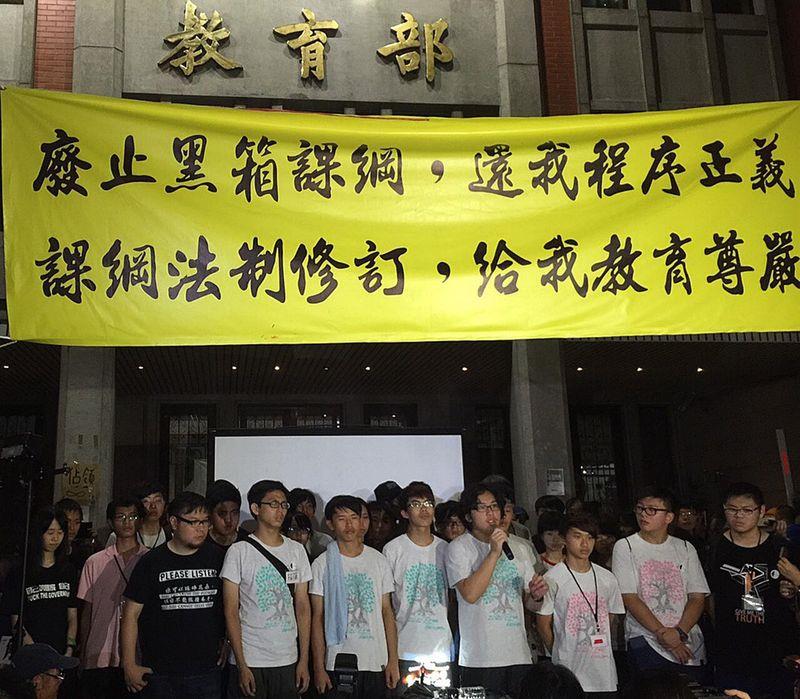 Students end protest ahead of typhoon

TAIPEI (Taiwan News) – The students protesting against the new high-school curriculum announced Thursday they were leaving the space in front of the Ministry of Education ahead of Typhoon Soudelor.
The protesters first occupied the MOE parking lot a week earlier, after the suicide of their spokesman, 20-year-old student Lin Kuan-hua. While the government has not made complete concessions, Taipei City Mayor Ko Wen-je advised them to seek refuge from the typhoon, which is expected to affect the capital beginning Friday.
The students said that for safety reasons because of the typhoon, their 162-hour occupation of the space in front of the MOE would end soon.
Taipei City workers would help them remove the tents, which could not withstand the onslaught of the typhoon, according to a student leader who had spoken to the company renting out the tents.
The protesters would return to their schools and continue their campaign against the new textbooks and their supervision at the government’s behavior in the matter, student leaders said.
While the MOE did not agree to the protesters’ demand to withdraw the new textbook versions, schools will be allowed to make their own choice between the original books or the new ones.
By the end of the month, the MOE will also form a new review committee to discuss the issue, while also conforming to the students’ demand that the list of committee members should be made public soon.
The protesters accused the previous committee of having made its changes in secret without consultation and of having abandoned Taiwan-centric elements in favor of a version more sympathetic to a Chinese view.