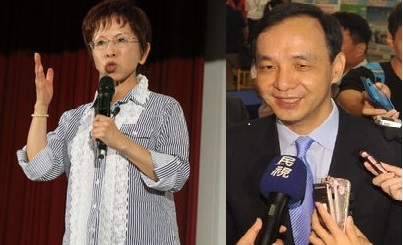 Kuomintang Chairman Eric Chu said he welcomes People First Party (PFP) Chairman James Soong’s bid to the presidential election next January, and that the KMT will do everything it takes to win, reports said Thursday.

Chu’s comments came after Soong’s official bid to join the race following his press announcement in the morning.

Asked if Soong’s contention would disrupt KMT’s chances of winning, the chairman said he is looking to bring his party members as well as supporters together in an effort to come on top.

“We do not fear the contention,” he exclaimed, saying only unity will bring them together.

Meanwhile, KMT presidential contender Hung Hsiu-chu said she will not back down, adding that Soong’s bid only makes her more determined to win.

“I will stand to the very end even when the going gets tough,” she said.

Hung however commended Soong as a political senior, saying although he turned his back on the late president Chiang Ching-kuo by moving away from the Nationalists party, his past contributions to Taiwan is unquestionable.

“I have total confidence in 2016. We are here to win, even if it means jumping over obstacles.”