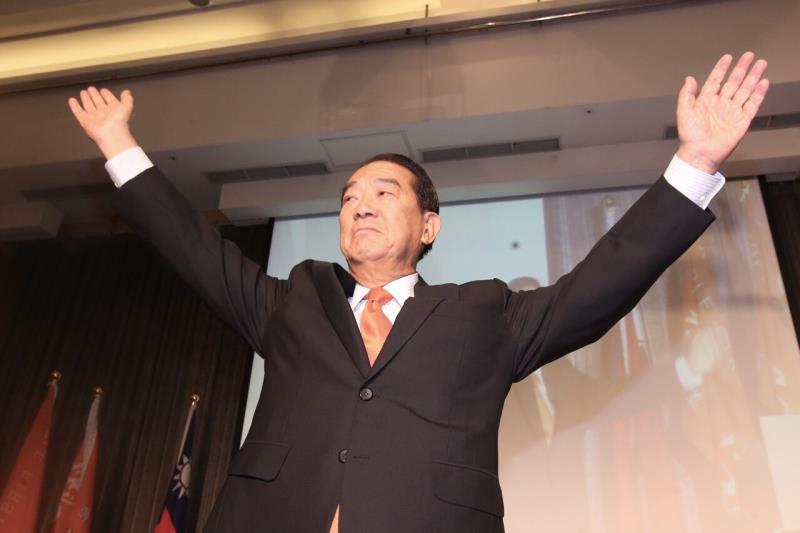 People First Party (PFP) Chairman James Soong confirmed Thursday his bid to the 2016 presidential race during a press conference held at the party’s headquarters in Taipei.

Soong’s official announcement came amid rumors speculating his plans to team up with Legislative Speaker Wang Jin-pyng next January.

This will be the fourth time the 73-year-old James Soong is going to run for president.

Throwing his hat into the ring could spell defeat for the ruling Kuomintang, according to some analysts.

A recent poll by Taiwan Indicators Survey Research (TISR) showed Soong is already ahead of KMT’s Hung Hsiu-chu by 3 percentage points. But both are trailing behind the opposition Democratic Progressive Party’s Tsai Ing-wen by more than 10 percentage points.

There are observers who believe Soong’s objective is not aimed at winning the presidency, but rather to help his People First Party to gain greater presence in the legislature. This is similar to what he did in the 2012 presidential race, where he was defeated but his party won 3 seats in parliament.

However, Soong told reporters on Thursday that his decision to run in January 16 is solely based on his wish to get Taiwan out of a stalemate, both economically and politically.

He also criticized KMT’s move to brainwash students with the controversial curriculum guideline changes, adding that this was not the way to tell history to the young generation of children brought up in a land of democracy.

Meanwhile, Soong said he is trying to help the country rise above political confrontations and to "find a roadmap for Taiwan's future."

The political senior said if he wins the election, he will forge a consensus among different political parties in order to pull Taiwan out of a stalemate.