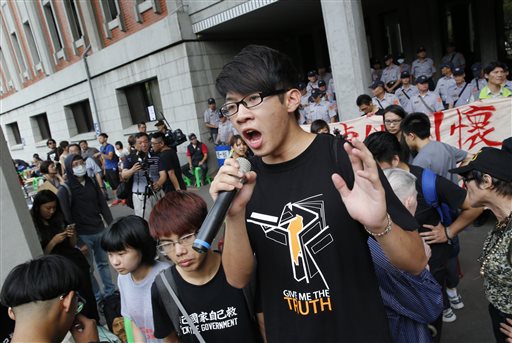 TAIPEI (Taiwan News) – Foreign media widely reported on the student protest outside the Ministry of Education against the curriculum changes Friday.
Following the suicide of 20-year-old movement spokesman Lin Kuan-hua Thursday, students stayed outside the ministry building Friday to demand Minister Wu Se-hwa’s resignation and the withdrawal of the changes, due to go into effect on Saturday.
“Protesters storm Taiwan ministry over student suicide,” Agence France Presse headlined. “Tensions rose as their demands were not met and around 200 broke down fences in the early hours of Friday using bamboo poles and street barricades,” according to the French news agency. “They took over a square outside the ministry building, but were unable to get any further as the doorway was guarded by police with riot shields.”
The piece also emphasized the students’ anger with the perceived pro-China bias of the new curriculum content. AFP reported about an interview Lin had given to the Chinese-language Liberty Times just days before his death.
“The curriculum changes disputed by protesters include a reference to Taiwan being “recovered by China” instead of “given to China” after the end of Japanese occupation in 1945,” AFP reported. The news agency also remarked that the new text spoke about the occupation of Taiwan by Japan, while the previous phrase merely mentioned that Japan “governed” the island.
Britain’s BBC News on its website compared the latest wave of protests with the Sunflower Movement. “Last year, students occupied Taiwan’s parliament for 24 days in what were the largest anti-China demonstrations in years, successfully blocking legislative approval of a controversial trade deal with China,” the BBC reported.
The Associated Press also emphasized the Chinese dimension of the latest protests. The students said the new curriculum “emphasizes China’s historic rule over the island, and that it also favors Taiwan’s ruling Nationalist Party, playing down its decades-long dictatorial rule.”
The AP quoted a protester saying the curriculum was biased. “The problem is that Taiwan actually is an island with multiple cultural influences. If you look back on Taiwan’s history, we have influences from the Spanish, the Dutch, the Japanese, the Chinese, as well as the aboriginal peoples, and even the Americans,” the AP quoted a protester named Peng Cheng. The new textbooks were too “Chinese-cultural-centric” to be acceptable, the AP quoted the student as saying.