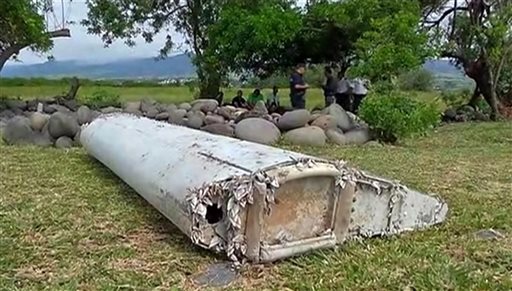 SAINT-ANDRE, Reunion (AP) — A barnacle-encrusted wing part that washed up on a remote Indian Ocean island could help solve one of aviation's greatest mysteries, as investigators work to connect it to the Malaysia Airlines flight that vanished more than a year ago.

The surprise discovery of the debris on a rocky beach stirred hopes and emotion among families of the missing, after a year and a half of grieving and frustration at a lack of answers, despite a wide, deep and expensive multinational search effort in the southern Indian Ocean, the China Sea and the Gulf of Thailand.

Even if it is confirmed to be a long-awaited first clue to the disappearance of Flight 370, there's no guarantee investigators can still find the plane's recorders or other remains.

French authorities moved the plane piece from the beach to the local airport on Reunion, and will send it next to the city of Toulouse, where it may arrive Saturday morning, according to the Paris prosecutor's office.

Toulouse is the hub of Europe's aerospace industry, with the headquarters of Airbus and a network of hangars and plane facilities. The plane part will be analyzed in special defense facilities used for airplane testing and analysis, according to the Defense Ministry.

Air safety investigators, including one from Boeing, have identified the component found on the French island of Reunion as a "flaperon" from the trailing edge of a Boeing 777 wing, a U.S. official said. The official wasn't authorized to be publicly named.

Flight 370, which disappeared March 8, 2014, with 239 people on board, is the only 777 known to be missing. The unsuccessful search for the plane has raised concerns worldwide about whether airliners should be required to transmit their locations continually via satellite, especially when flying long distances over the ocean.

Australian Prime Minister Tony Abbott, whose country is leading the search for the plane in a remote patch of ocean far off Australia's west coast, expressed hope Friday that the part would help solve the baffling mystery that has left the families of those on board in an agonizing limbo.

"Nothing has been confirmed, but obviously this is, by far, the most encouraging sign so far," Abbott told Sydney radio station 2SM. "We have long thought it went down somewhere in the Indian Ocean and, at last, it seems that we may be on the verge of some confirmation."

If it turns out to be part of the Malaysian plane, that could bolster the theory that the plane deviated from its path between Kuala Lumpur and Beijing and turned south into the Indian Ocean. And it would put to rest speculation that it could have traveled north or landed somewhere after being hijacked.

The discovery has changed the life of Reunion environmental worker Johnny Begue. He told The Associated Press that he stumbled across the plane part on Wednesday morning, while collecting stones to grind spices.

"I knew immediately it was part of an aircraft, but I didn't realize how important it was, that it could help to solve the mystery of what happened to the Malaysian jet," Begue, 46, told The Associated Press.

He said he called several of his workmates and they carried the wing fragment out of the water so that it would not be battered by the surf against the volcanic rocks that make up most of the beach.

Begue also discovered a piece of a suitcase about 2.5 meters (8 feet) away, he said, though it's unclear whether there is any link to the plane wing.

Authorities wouldn't comment Thursday on whether Begue was the first to report discovering the component. Colleague Teddy Riviere corroborated his account, and praised him for the discovery. Members of Begue's soccer team kidded him on his new fame in local media.

Australian officials expressed skepticism on Friday that the suitcase was associated with the wing part. Australian Transport Minister Warren Truss noted that there did not appear to be any marine life attached to the suitcase, indicating it probably hadn't been in the water for long. But he dubbed the wing part a major lead in the investigation.

"There's strong evidence to suggest that the wreckage found on Reunion Island does come from a Boeing 777," Truss told reporters on Friday. "That has not yet been confirmed, but the pictures that are available for people to examine are certainly consistent with the parts from the wing of a Boeing 777. "

The wing piece is about 2 meters (6 feet) long. Investigators have found a number on the part, but it is not a serial or registration number, Truss said. It could be a maintenance number, which may help investigators figure out what plane it belongs to, he said.

The fact the part was found 4,200 kilometers (2,600 miles) from the current search site does not mean officials are looking in the wrong place, said Australian Transport Safety Bureau Chief Commissioner Martin Dolan, who is heading up the hunt. Conversely, it gives them reassurance that they're in the correct spot, given that ocean modeling predicted that currents would eventually carry any floating wreckage to the African coast. The discovery is therefore unlikely to alter the seabed search, he said.

"There's been a lot of public doubt about whether we're searching in the right place," Dolan said. "We remain highly confident in our work defining the search area."

Malaysian authorities, meanwhile, were headed to Reunion and Toulouse.

"We have had many false alarms before, but for the sake of the families who have lost loved ones, and suffered such heartbreaking uncertainty, I pray that we will find out the truth so that they may have closure and peace," Prime Minister Najib Razak said in a statement.

A French law enforcement helicopter is scouring the waters around the island in hopes of spotting more debris, and U.S. investigators are examining a photo of the debris.

The wing part was found on a desolate, rocky beach in the small town of Saint-Andre and was transferred to the civil aviation authority's offices in the island's main airport, a local police official said.

Flaperons are located on the rear edge of both wings, about midway between the fuselage and the tips. When the plane is banking, the flaperon on one wing tilts up and the other tilts down, which makes the plane roll to the left or right as it turns.

The piece could help investigators figure out how the plane crashed, but whether it will help search crews pinpoint the rest of the wreckage is unclear, given the complexity of the currents in the southern Indian Ocean and the time that has elapsed since the plane disappeared.

The last primary radar contact with Flight 370 placed its position over the Andaman Sea about 370 kilometers (230 miles) northwest of the Malaysian city of Penang. Reunion is about 5,600 kilometers (3,500 miles) southwest of Penang.

There is precedence for large objects traveling vast distances across the Indian Ocean. Last year, a man lost his boat off the Western Australia coast after it overturned in rough seas. Eight months later, the boat turned up off the French island of Mayotte, west of Madagascar — 7,400 kilometers (4,600 miles) from where it disappeared.

If the part belongs to Flight 370, it could provide valuable clues to investigators trying to figure out what caused the aircraft to vanish in the first place, said Jason Middleton, an aviation professor at the University of New South Wales in Sydney. The nature of the damage to the debris could help indicate whether the plane broke up in the air or when it hit the water, and how violently it did so, he said.

But the sister of a Flight 370 passenger says she is skeptical of the new find.

"It has been more than one year, and now they claim to have found debris of MH370 on an island? We don't accept this. We do not believe what they claim. The finding does not constitute anything," Dai Shuqin told The Associated Press. Her sister Dai Shuling and five members of her family were on the plane.

Over the past 16 months, hopes have repeatedly been raised and then dashed that the plane, or parts of the plane, had been found. In the end, none of them were from Flight 370.