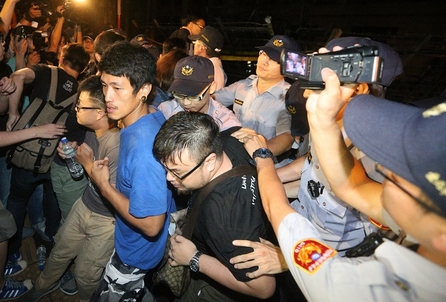 Lin Kuan-hua, a student who had broken into the Ministry of Education (MOE) building last week to protest against the government’s initiative to change the high school curriculum, was found dead in his apartment Thursday morning. The 20-year-old student apparently locked himself up in a room and took his own life by burning charcoal, according to emergency workers of the New Taipei Fire Department, who were summoned to the scene by Lin’s mother. As a Juang Jing Vocational High School student in New Taipei, Lin was released on a NT$20,000 bail after being detained for around 20 hours for storming the MOE building on July 23. He was one of the 33 people arrested in the early hours of July 24 and faced possible prosecution along with 23 other intruders. According to his mother’s account, Lin was said to have fallen under depression after been released from detention. Meanwhile, a report published by the Apple Daily also said Lin’s mother and sister had been taking turns to look after him by staying up late until 4 a.m. Thursday in their home in Banciao. Lin was however found dead in his room early in the morning at 8:30 a.m. MOE’s Chief Secretary Wang Chun-chuan expressed his shock and regret after learning about Lin’s suicide, urging the student protestors to be rational despite their opposition against the government’s initiative. Wang said MOE Minister Wu Se-hwa is up for further talks and negotiation with the students on August 5, again urging them to refrain from doing anything irrational. New Taipei City Education Bureau chief Lin Teng-chiao also rushed to Lin’s residence in Banciao after learning about the tragic incident to send his condolences to his family. He however turned down speculations that Lin and his fellow students had taken part in a closed-door meeting at the ministry a day prior to his death. National Suicide Prevention service hotline (24H): 0800-788-995; or Life Line at: 1995