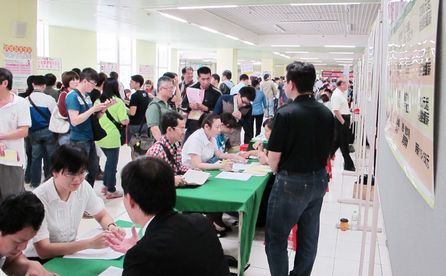 Jobs are getting harder to come by as fresh college graduates flock to the career market during summer seasons, according to one of Taiwan's top human resources agencies, the 1111 job bank on Monday.

Despite the jobless figure being the lowest in 15 years in a recent survey conducted by the Directorate-General of Budget, Accounting and Statistics (DGBAS), the job bank said the 20-to-24 group still had the highest unemployment rate of 12.27 percent in June.

In a survey conducted by the job bank on how employers feel about first-time jobseekers, the island’s corporations gave them an average of 2.1 months in terms of adaptation period, which is the time of on-the-job orientation for new employees.

Meanwhile, from a scale of a 100, the employers polled rated an average of 44 points in terms of how they perceive new entrants. Almost half of those questioned viewed them as showing “average performance” while 38 percent said their performance were unsatisfactory.

Vice president of 1111 Job Bank Daniel Lee said the low score is attributed to the lack of social experience found in fresh recruits, including corporate culture, workplace adjustment, and among other reasons.

The survey also revealed that 45.2 percent of those polled said new entrants cannot withstand work under pressure, while 39.2 percent lack responsibility on the job. However, 29.1 percent polled said fresh rookies are fast learners.

Long working hours and low salaries have been major problems in the job market for a long time, which is why local employees (especially new entrants) will not stop to complain, Lee said.

In an effort to get hold of their first job, many new entrants have no choice but to accept low salaries, Lee said, adding that as workloads increase, the quit rate becomes more visible.