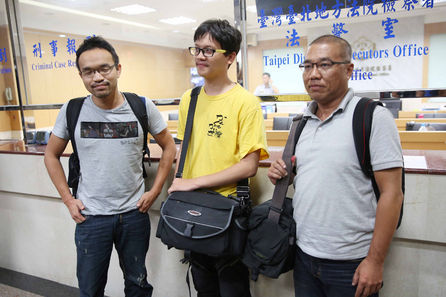 Journalists debate over freedom of press

Students who rallied against the altered curriculum launched a surprised “occupy” the Ministry of Education action on July 23, around 33 students are arrested, including three journalists.

Liao Chen-hui, the reporter of Liberty Times, was held in custody by the police. Liao was free to interview the students and the whole action until the police told them that the Ministry of Education insisted on suing them. The reporters were held in custody with the students, they could not use their electronic devices. The police forbid him to call Liberty Times despite his phone was ringing the whole time. Liao ate two meals in the police station and faces legal charges.

“I will do the same thing in the future. I do wish there are more reporters so the government could not harm the freedom of press,” said Liao.

Weng Po-en, the citizen journalist who was held in custody, said the police attacked the journalists. There were only 3 reporters at the scene on July 23. Weng said they were arrested even after they presented their identity as journalist. He said he was treated violently, the police handcuffed him and hit in the back of his head. “I am not afraid and I will continue doing what I do. However, out of all the social movements, this is the first time I have encountered such ridiculous situation,” exclaimed Weng.