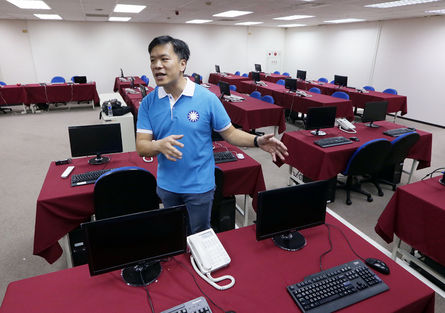 Jack Yu, spokesperson for Kuomintang’s presidential candidate Hung Hsiu-chu, disclosed on Facebook Sunday that he will quit his current position beginning August 1 following the end of his annual break at Shih Hsin University in Taipei.

He will however work as part-time consultant for Hung whenever he manages to squeeze time between classes.

Yu is a professor at the university’s Graduate Institute of Communications, who has also been serving as Hung’s spokesperson since June.

He said he will no longer be able to commit on a full-time position, adding that he is willing to assist Hung whenever there is a chance outside of school.

Shih Hsin has imposed explicit instructions that their professors remain politically neutral when in class, according to Yu.

Yu said the two other young spokespersons, who are in their late 20s, have been well oriented and that they will be tasked to speak on behalf of Hung once he leaves his position after August.

While cherishing the experience working for Hung, Yu posted on Facebook that he will concentrate on his research thesis beginning next month.